Directed by Nicole Kassell
A complex tale that severely tests the limits of our empathy and compassion.

Movies provide us with some of the best opportunities for empathy in a culture where strangers avoid each other and many groups are considered outsiders or pariahs because of race, class, gender, and social status. Erik Kolbell has written: "Empathy is risky business, which may be why we so often shy away from it. It's risky because when we extend ourselves to a person who is in pain we're allowing their condition to remind us of our own, remind us that what they are bearing is the human condition, and the inevitability to which we are all exposed."

Empathy is an innate human capacity that enables us to understand the experiences of another person. It allows us to connect with those who are worlds apart from us. The Woodsman is an exceptional movie about a pedophile who has just been released from prison and is seeking a new life. Society has a very low view of sexual offenders; they are even ostracized in jails, considered so vile by other prisoners that they are often the victims of abuse and even murder. You couldn't ask for a better empathy practice than a movie about a pedophile.

Walter (Kevin Bacon) has spent 12 years in prison after being convicted of molesting 10-12-year-old girls. Released on supervised parole, he is trying to start his life over. He rents an apartment and takes a job at a lumberyard with a boss who knows about his record. Walter stays to himself at work, but his need for solitude at lunch rubs Mary Kay (Eve), a secretary, the wrong way. She decides that he's "damaged goods" and hiding some dark secret. Vickie (Kyra Sedgwick), who operates a forklift, refuses to take any sexual banter from the men at the lumberyard. She is attracted to Walter and gives him a ride home. After a few beers, they have sex, but he refuses to tell her about his past.

Meanwhile, Walter regularly sees a therapist who suggests that he keep a journal to get in closer touch with his inner feelings. He is stunned when Carlos (Benjamin Bratt), his brother-in-law, returns a cherry desk that Walter had given him and his sister as a wedding gift. She still refuses to see him, and they won't invite him to his niece's birthday party. But the one person who really gets to Walter is Sergeant Lucas (Mos Def), who views him as the lowest of the low. He shames him with stories about his encounters with sexual perverts and takes great pride in making sure Walter knows that he is watching his every move so he can return him to prison for the rest of his life if he reoffends.

In her debut as a feature film director, Nicole Kassell has also written the screenplay based on a drama by Steven Fechter. The Woodsman is one of the best films of the year with its riveting depiction of a troubled young man who is trying to reclaim his life and leave behind his addiction to young girls. The screenplay and the characters are so well developed that the film becomes an occasion for every member of the audience to root for Walter as he struggles against the many forces that stand in his way. This drama reveals how difficult it is to stay on the straight and narrow path when there are those who treat you as subhuman and are willing to go out of their way to hurt you.

Walter struggles mightily with his urges in a mall where he follows some teenage girls and then turns away. His apartment is right across from a school playground. He watches from his window and sees a male sex offender hanging around the little boys and trying to get them to enter his car. He is a terrifying reflection of his own worst urges. Vickie stands by him even after Walter reveals the truth about his pedophilia, and it provides him with the best possible boost to his morale. But then he meets an 11-year-old girl in the park while she is birdwatching. In one instant, his face lights up and his charm kicks into high gear. The pain is palpable as we root for Walter to pull away and follow the instincts that have led him to yearn for a normal life with others instead of his isolating and cruel obsession. 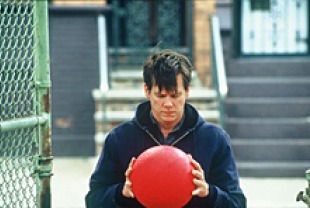