William Shakespeare's The Merchant of Venice

Directed by Michael Radford
Boasts a sterling performance by Lynn Collins as an enchanting Portia who makes the most of her beauty and her brains.

In the Elizabethan theatre, this Shakespeare drama was conceived and written as a comedy. But its scenes depicting the anti-Semitism of the good Christians of Venice have given the play more somber shadings down through the centuries. In this version written and directed by Michael Radford (1984), a lighter touch has been restored to the story. A fresh presentation of the wit and intelligence of a very desirable woman carries the day.

Bassanio (Joseph Fiennes) is a Venetian gentleman who needs some money to woo a woman who has caught his fancy. He calls upon his good friend Antonio (Jeremy Irons), who has most of his money invested in cargoes at sea; nonetheless his credit is good in the city. So a loan of 3,000 ducats is gotten from Shylock (Al Pacino). This usurer who was spat upon by Antonio and treated shamefully in public tries to play a game with the two men: he offers the loan with no interest and then adds the proviso that he expects a pound of flesh in the event of failure to repay.

Bassanio sets out on his journey to the court of Portia (Lynn Collins), the beautiful woman of his dreams. Her wealthy father's will has stated that those who want to wed her must choose between three caskets: one of gold, one of silver, and one of lead. With great pluck, Bassanio chooses the right one and wins her hand.

Antonio is not so lucky. He learns his ships have sunk, and the bond must be paid. Shylock's spirits have turned even more sour since his daughter Jessica (Zuleikha Robinson) ran away from home with Lorenzo (Charlie Cox), a Christian. Bassanio weds Portia, and she gives him a ring as a token of her love and esteem. He arrives just in the nick of time to help Antonio. He has enough money to pay off the debt but Shylock only wants the payment in Antonio's flesh. A young and gifted lawyer turns things around and then has a few surprises that test Bassanio's commitment.

Al Pacino humanizes the feisty and vengeful Shylock but the character still is treated so shabbily that we were tempted to call in the Anti-Defamation League to defend him. Lynn Collins steals the film with her stout-hearted depiction of Portia, a woman whose beauty is matched by her brains and her daring. This well-done version of William Shakespeare's The Merchant of Venice can easily stand proudly in the company of other sterling versions of Shakespeare's plays.

The DVD's extras include a commentary with Michael Radford and Lynn Collins, the behind-the-scenes making of the featurette, and a Web Link to a Teacher's Guide (for classroom study). 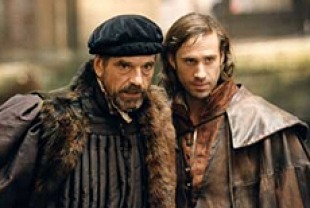 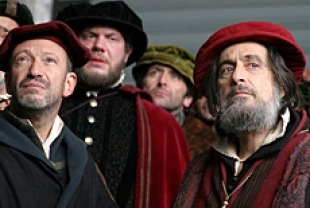 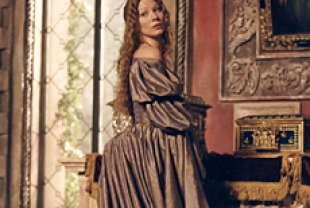