The Assassination of Richard Nixon

Directed by Niels Mueller
A spectacular performance by Sean Penn as a powerless and alienated young man whose rage becomes a reality when his dreams are dashed one by one.

"All I want is a little piece of the American Dream," says Sam Bicke (Sean Penn), a very depressed and distraught man who has been separated from his wife, Marie (Naomi Watts), and their two children for some time now. He works as a salesman in an office furniture store for Jack Jones (Jack Thompson), a gung-ho believer in the power of positive thinking and the bromides of Dale Carnegie's How to Win Friends and Influence People. Sam wants to be a winner but deep down inside, he knows that he is a loser. He is on bad terms with his brother Julius (Michael Wincott), who is a successful entrepreneur. Sam has applied at the bank for a small-business aid plan to start up his own operation of a tire store with his best friend Bonny (Don Cheadle), a hard-working mechanic. But suddenly nothing seems to be working; everything is out of sync.

Sam hangs around the bar where Marie works and criticizes the management for making her wear short skirts. His boss orders him to shave off his moustache so he won't look like a hippie and alienate the straight-arrow customers. Jack even tells his sad-sack employee that Nixon is the ultimate salesman since he was able to sell the country twice that he would pull American soldiers out of Vietnam. Sam sinks deeper into depression when there is no response about his loan. Suddenly Richard Nixon is on TV every day, and Sam unleashes his anger on the President whom he sees as the source of all his woes. He even goes down to the local Black Panther headquarters and volunteers to participate in their revolution. Harold Mann (Mykelti Williamson) listens to him with astonishment as he explains his idea that they can increase their membership by merging with whites and forming a group called Zebras.

The Assassination of Richard Nixon is written and directed by Niels Mueller, who wrote the screenplay for Tadpole. Here he presents a laser-sharp portrait of a man at the end of his rope. Sam's fury rises to the surface when he quits his job and learns that Marie has found another man and is divorcing him. What is it like to feel powerless and alienated in America? Sean Penn puts in a spectacular performance as Sam Bicke. Through him, we see what it is like to be lost in a torrent of self-disgust and rage against the outside world. 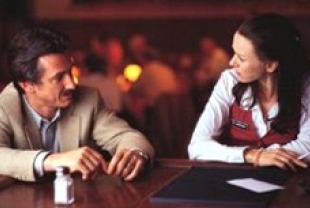