Rodney Copperbottom (voiced by Ewan McGregor) lives in Rivet Town with his father, Herb (Stanley Tucci), a dishwasher, and his mother (Dianne Wiest). This robot family is so poor that his body parts are upgraded through the different stages of his childhood with hand-me-down parts from relatives. Despite his humble origins, Rodney dreams of being an inventor and working for Mr. Big Weld (Mel Brooks) in Robot City. The boy has already created Wonderbot, a mechanical wizard that can do all sorts of things. With the blessing of his parents, Rodney leaves home to seek his fortune at Big Weld Industries.

But when he arrives in the large metropolis, he discovers that Ratchet (Greg Kinnear) is now in charge of operations, and he takes orders from his dastardly mother, Madame Gasket (Jim Broadbent). Their plan is to serve the rich and the powerful and to let everybody else fend for themselves. How are they going to achieve this? They intend to stop manufacturing spare parts and will only manufacture "upgrades" for those who can afford them. The slogan they have come up with is: "Why be you when you can be new?" Those who can't afford these mechanical makeovers will be designated "outmodes" and consigned to the Chop Shop run by none other than Madame Gasket. What a sweet deal for her and her son!

Rodney is very disappointed to find that Mr. Big Weld has disappeared and that there is no job awaiting him. But he soon wins the respect of a group of "outmodes" by fixing them up before the city sweepers can grind them up. Among his new friends are Fender (Robin Williams), a lovable loudmouth who has trouble keeping himself together, his sister Piper (Amanda Bynes), Aunt Fanny (Jennifer Coolidge), Diesel (James Earl Jones), who is always on the lookout for a voice box, and Cappy (Halle Berry), a renegade from the Big Weld Industries' hierarchy. Together, they muster enough courage to take on Rachet and his minions.

Robots is another computer-animated winner from Blue Sky Studios which brought us Ice Age (2002). Chris Wedge directs this frolicsome and consistently clever story by playwright David Lindsay-Abaire and veteran writers Lowell Ganz and Babaloo Mandel. We especially liked the jabs at uncompassionate capitalism where those who are rich get the breaks and the losers are consigned to the scrap heap of urban living. Equally whimsical is the robots pouring oil all over their bodies instead of fueling up for the day with caffeine. Credit Wedge and company for a generous supply of creative bits such as Fender doing a "Singin' in The Rain" number and Big Weld playing the biggest game of dominos ever.

DVD Special Features include Deleted Scenes, one Audio Commentary track with director Chris Wedge and producer William Joyce and another with Technical Director Mitch Kopelman and several of the film's animators, a feature on the making of Ice Age 2, Blue Man Group Featurettes, and two bonus shorts: "Aunt Fanny's Tour of Booty," and the original Robots pitch. 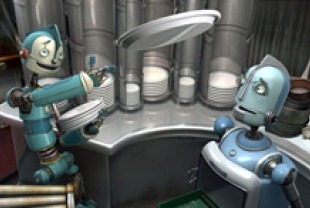 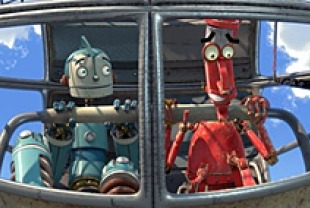