Directed by Dana Adam Shapiro, Henry-Alex Rubin
A rip-roaring documentary that will take you to places you have never been before and introduce you to some extraordinary quadriplegics.

Canadians came up with the name "murderball" for a rip-roaring contact sport now called quad rugby. The game is played by quadriplegics in custom-designed armored wheel chairs. These men, who have a hard time putting on their shoes, opening a card, and giving a firm handshake on the court, are warriors who compete with great bravado and total absorption in the game. They play without helmets or pads and often find themselves upended on the floor.

Filmmakers Dana Adam Shapiro, Jeffrey Mandel, and Henry Alex Rubin wisely focus on two antagonists — one from the American team and one who coaches the Canadian team — as they square off against each other during the 2002 World Championship in Sweden through the Paralympics in Athens in 2004. This engrossing documentary has plenty of action, up-close and personal portraits, and several heart-affecting scenes. As one of the players says, the mind becomes a disability when it remains attached to the idea of ever walking again. The minds of these quad rugby players are focused on winning through fierce determination and rigorous discipline.

Mark Zupan is one of the highest scorers for the American team and eventually becomes their spokesperson. He is a muscular gladiator who lives to play quad rugby. He was asleep in a car when his best friend Christopher Igoe, who was drunk at the time, crashed the vehicle, and Zupan was crippled. Igoe doesn't show up for a class reunion but Zupan invites him to Athens for the Paralympics. In one of the best scenes, Zupan visits a rehab center where an avid cyclist who has suffered a spinal chord injury is inspired with the idea that he can return to sports by playing quad rugby. His spirits are visibly lifted as he tries out the athlete's armored wheelchair.

The team that is America's chief competitor is coached by Joe Soares, who, after being cut from the squad, went north across the border in anger. Whenever members of the American team talk of him, they refer to him as a traitor. That doesn't bother this driven man who savors the moment when the Canadian team beats the Americans in the World Championship final, ending their eleven-year sweep. But Soares does have problems at home with his twelve-year-old son who has no interest in sports. He desperately wants his father to approve of his academic abilities and his musical talents. Soares suffers a heart attack and afterwards becomes more understanding of his son and others. Some relatives call the stroke a God-given gift.

Perhaps the most emotionally involving portrait in this documentary is that of a quad rugby player for the United States who has no legs and only stumps of arms. He says poignantly, "We use everything we can to get through life." Here is one wheelchair movie that will take you to places you have never been before and give you a chance to meet some extraordinary individuals. 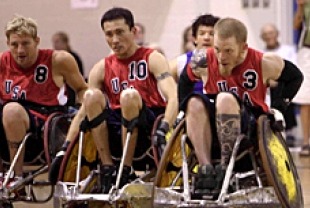