Directed by Hubert Sauper
A shocking and soul-shaking Austrian documentary about the dire effects of globalization upon the poor citizens of Tanzania.

Darwin's Nightmare has won many prizes including one for Best European Documentary Film of 2004. Austrian filmmaker Hubert Sauper has made a hard-hitting expose on the negative fallout of globalization. While watching this incredible documentary unfold, we kept thinking of Jesus' parable about the rich man and the poor person eating the crumbs that fell from his table. For that is exactly what happens in this glimpse of First World multinational corporations exploiting Tanzania's resources while millions of Africans starve nearby. The emotional undertow of the documentary comes with its appalling revelations about the glaring inequities resulting from consumer capitalism.

Sauper arrives in the small town of Mwanza, the location of a prosperous fish company that employs a thousand Africans. Their product is perch from Lake Victoria. In the 1960s this fish was introduced into the waters of the second largest tropical lake on earth and the source of the Nile. The experiment soon went awry. The perch devoured all the other species in the lake; this predator also eats its own young. The white fillets are exported to Europe and all around the world, feeding two million people every day, but in the African villages around the lake, no one can afford the perch. In one of the most gruesome scenes, women prepare to sell discarded and rotting body parts that the factories have thrown away. The heads are cooked and sold to poor families who have no other source of food.

Because the fisheries have taken many Africans away from farming, there is a shortage of rice and other food staples. In one scene, some street children fight each other for a handful of rice. News reports note that in the face of a famine in Tanzania, the United States is being asked for seventeen million dollars in aid. Sauter interviews a night guard who earns one dollar a day. He says that his son wants to be a pilot. The boy sees Russian planes fly overhead and land at the airport regularly. Sauter talks with pilots and cargo supervisors and learns that they leave with a daily cargo of 500 tons of Nile perch. After a lot of persistent questions, he also learns from one Russian that his company makes most of its money transporting weapons for various wars in Africa. He has flown tanks and other artillery into Angola.

Another Russian, asked about the wars in the area, says there aren't any and that most of the problems stem from the fact that Africans don't want to work. Of course, just the opposite is true. Work is very hard to find, and the disappointed men turn to alcohol and prostitutes. AIDS causes many deaths. A Christian minister has buried many of these men and women but he still refuses to advise those who have sex with strangers to use condoms. He says that it would be like recommending that recreational sex is okay.

While a factory owner proudly displays a mechanical fish that sings "Don't Worry, Be Happy," some prostitutes mourn the death of a friend who was stabbed to death by an angry European. While European Union officials talk proudly about the fisheries they have seen in Tanzania, depressed boys who live and sleep on the streets of Mwanza melt down the plastic packaging used by the fisheries to create a glue for sniffing as a drug. While local politicians admit they are mainly interested in selling their countries, large numbers of their brothers and sisters are starving to death, being massacred in civil wars, or dying of AIDS.

Sauter does not single out the entrepreneurs, the Russian pilots, or the politicians as evil-doers. But he does show that the entire system of globalization makes it possible for those involved in this profit-making enterprise to emphasize success above all other human values. They are able to look the other way. We find it hard to do the same after seeing this powerful expose of the shocking consequences of capitalism that gives survival of the fittest new meaning.

Special DVD features include an interview with director Hubert Sauper. 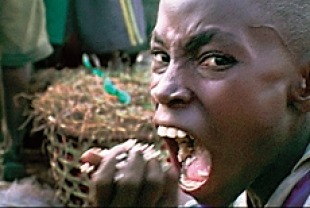