"Nature and I have little in common. We don't go to the same restaurants, laugh at the same jokes, or, most significant, see the same people," humorist Fran Lebowitz once wrote. The urban devotees in this computer-animated comedy know just what she means.

Alex the Lion (voiced by Ben Stiller) gets his jollies performing each day as the central attraction at the Central Park Zoo in New York City. At a birthday party for his best friend Marty the Zebra (Chris Rock), he and their other buddies Melman the Giraffe (David Schwimmer) and Gloria the Hippo (Jada Pinkett Smith), learn that this four-footed creature yearns to taste the joys of life in the wild. When Marty discovers that a band of penguins are making a break for it, he heads off on his own for a night in the country.

His friends come after him and cause quite a panic on the streets and subways of the city. Alex the lion gets no respect from a violent little lady who has obviously taken some self-defense courses. After they and the penguins are captured at Grand Central Station, some animal rights activists advocate for their freedom to live in the wild. Soon the four friends find themselves in four crates on a ship to Africa. After a shipwreck, they wash up on the shores of Madagascar, which they mistake for a San Diego zoo.

Alex, Melman, and Gloria suffer culture shock and don't know what to make of the natural world. While they long for the comforts of their caged existence, Marty leaps for joy in this new island world. The only signs of humans are the bones of the dead in crashed planes. King Julian (Sacha Baron Cohen), the self-proclaimed head of a tribe of lemurs, must make some quick decisions about how to relate to the four outsiders. His right-hand man, Maurice (Cedric the Entertainer), doesn’t trust Alex and feels that he is an out-of-control beast who could turn violent at any time. But most of the lemurs want the outsiders to protect them from predators.

Eric Darnell and Tom McGrath are the writers and directors of this cartoon comedy about friendship, always a good theme for youngsters. The story zigzags hither and yon and even brings the penguins to the island. The fish-out-of-water theme works for a while but wears out its welcome in the last stages of the story. Chris Rock's patter also grows tiresome. But the animation is impressive enough (notice Alex's mane, Melman's neck, the way the Alex's and Marty's bodies undulate during their shows, and the lemurs' dance sequences) to make the entire adventure worth seeing. 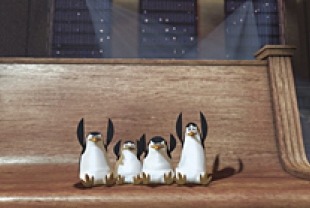 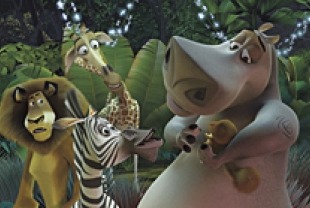