Directed by Phil Morrison
An endearing small film about a couple who find their new marriage tested during a visit to the groom's family in North Carolina where traditional values hold sway.

One of the challenges in a new marriage is coming to terms with each party's birth family. It is said that every time a couple goes to bed they take with them four others — both sets of parents. And a few siblings may be around as well. Sometimes there are secrets from the past that we do not want to share with our mate. Other things just never come up until they pop out and leave our new partner feeling awkward, as if in the presence of a complete stranger.

Many of these elements are dealt with in Junebug, an eccentric and boldly original drama about love, marriage, and birth families. The screenplay by Angus MacLachan is filled with realistic details that leap off the screen and land in our open arms as naturally as a well thrown ball in a game of backyard catch. Phil Morrison pulls off a major feat by conveying life in a small Southern town where Christianity is at the hub of many people's lives. He draws out top-drawer performances from many of the characters, especially Amy Adams, Embeth Davidtz, and Alessandro Nivola. This is the kind of leisurely paced film that bears repeated viewings to catch all the emotional nuances as the characters try to deal with the secrets of family life and the challenges of marriage.

Madeleine (Embeth Davidtz) is a Chicago art dealer who specializes in self-taught artists. She meets a younger man named George (Alessandro Nivola) at an auction and marries him after a short courtship. Six months later, they decide to feed two birds with one seed by visiting his birth family in a small North Carolina community when they go to try to make a representation deal with a colorful local artist who paints extravagant Civil War scenarios from the visions he claims he's gotten from God.

Not having been invited to their son's wedding, George's parents are a little on edge when he shows up with his attractive, smart, and accomplished bride. Whereas George's mother Peg (Celia Weston) is stunned by Madeleine's lack of maternal qualities, her quiet and hen-pecked husband Eugene (Scott Wilson) is pleased to meet her.

George's younger brother Johnny (Ben McKenzie) is an angry, sullen, and self-centered young man who is in a funk about his wife Ashley's (Amy Adams) pregnancy. Although Madeleine makes an effort to be especially cordial to him, he pretty much ignores her. For the lonely Ashley, this pretty outsider is manna from heaven. She immediately wants to know everything about her — from beauty tips to her background and her special interests.

Madeleine reveals that she is a diplomat's daughter and has lived in India, Africa, and Washington, D.C. George's family lives in quite a different world; their lives orbit around a community and a Christian church. In fact, Madeleine's first clue that she and her husband are from different planets comes when the minister at the congregation asks George to "give us a hymn" at a church dinner. His sweet and buoyant rendition of "Softly and Tenderly Jesus Is Calling" touches the hearts of everyone in the room, bringing tears to the eyes of his mother and others. Madeleine is stunned that the man who has turned her on in bed so many times has a talent he never bothered to share with her.

While George goes off on his own, Ashley takes it upon herself to entertain her new sister-in-law — taking her to the mall, putting nail polish on her fingers, and inviting her to her baby shower. But after meeting David Wark (Frank Hoyt Taylor), the local artist, she becomes convinced that she can best introduce him to the world. When Madeleine learns that his sister, a lawyer, wants him to sign with a slick New York art dealer, her competitiveness kicks into high gear. Meanwhile, the moody Johnny, who has always stood in the shadow of his handsome older brother, misinterprets a hug from Madeleine and tries a sexual move of his own.

All of the unease in George's family seems to stem from his decision to leave home for a world apart from North Carolina and its emphasis on community and traditional values. They see his setting out for new territory as a betrayal, and that is the secret that is festering like an open wound. When Ashley faces a crisis at the hospital while giving birth, George sees in Madeleine's response a mirror image of what he did so many years ago.

Junebug is another one of those creative and endearing independent films that deserves a large audience. Luckily, DVD releases now give everyone a chance to catch up on these kinds of movies which only open sporadically in theaters across the country. 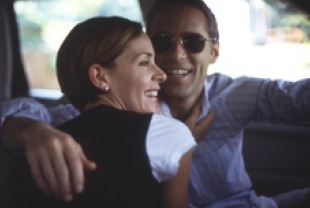 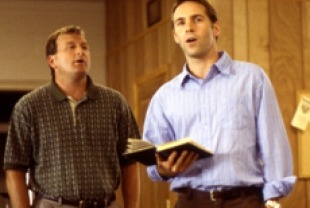 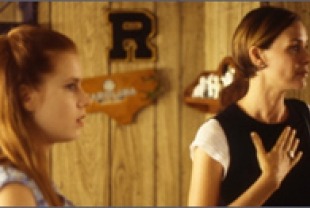 Read our reflections on Junebug