Directed by Lasse Hallstrom
A sensitive treatment of the slow and often difficult process of forgiveness after years of hurt, anger, and disappointment.

Forgiveness does not come naturally to any of us. We have to honor the long and hard road that it sometimes takes to get there. We don't want to speed past the lessons that can be learned in the process. Anger is a particularly tough emotion that needs to be treated with respect and patience. And we have to allow ourselves time to come to an honest evaluation of our own stance and the errors we may have made in holding on desperately to the past.

All of these issues play a part in An Unfinished Life. Three of the main characters have been deeply wounded by an event in the past, and they must come to terms with their volatile emotions. Lasse Hallstrom directs this movie based on a novel by Mark Spragg. He is an old hand at dealing with dysfunctional families and feisty characters who are forced by circumstances to change their lives — all you have to do is to recall What's Eating Gilbert Grape, The Cider House Rules and The Shipping News.

Einar Gilkyson (Robert Redford) is a cranky recovering alcoholic who has not been able to get over the loss of his son Griffin in an automobile accident 12 years ago. He lives on a ranch outside Ishawooa, Wyoming, with his best friend and former ranch hand Mitch (Morgan Freeman), who was badly mauled by a bear a year earlier. He cannot walk without crutches and no longer does any work. As a sign of their enduring 47-year friendship, Einar gives him a daily dose of morphine, a back rub, and three meals a day. He's not really working the farm anymore. After his son died, his wife left him, he sold the cattle and has settled down to stew about the bad hand life has dealt him. Einar is an angry man but fortunately for those around him, he is also a man of few words.

Jean (Jennifer Lopez), Griffin's wife, was driving the car when he was killed. When she shows up with her eleven-year-old daughter, Griff (Becca Gardner), Einar bluntly tells her that he doesn't want her around. He hasn't seen her since the accident and wasn't even aware he had a grandchild. She pleads with him to let them just to stay a month so she can get back on her feet. She has fled from her latest boyfriend, Gary (Damian Lewis), who beat her up regularly.

Jean lands a job as a waitress at a café in town run by Nina (Camryn Manheim). Griff stays out at the ranch. She asks her gruff grandfather about the cats surrounding him in the barn while he's milking the cow and learns he can't even tell them apart. She immediately names them and bides her time until one day when Einar asks her to help him fix his broken-down pickup truck. She tells him she'd like to be a cowgirl, and he gives her a horseback ride. That certainly opens up the closed door between them just a crack. Meanwhile, Jean begins seeing Crane (Josh Lucas), the sheriff in town who tries to bolster her sagging self-esteem. She is carrying her own guilts and can't seem to connect with Einer no matter what she says or does.

Mark Spragg and Virginia Korus Spragg have written a heart-affecting screenplay. The key character in the story is Mitch, a man whose life was turned inside out when a bear almost killed him. Yet when he learns that the wild animal has been captured by the Fish and Game people and put in a local zoo, he orders Einar to feed the bear for him. After seeing the bear in a cage, Mitch tells Einar he wants him to set him free. Forgiving the animal that made him an invalid takes plenty of courage, and he models this spiritual practice for his best friend.

It is interesting to watch Einar soften at the edges as he grows closer to Griff. The aging cowboy manages to vent some of his large reserves of anger in a fight with three drunks who play rough with Nina and then gets really rough with Gary, Jean's abusive ex-boyfriend, after he threatens her and Griff.

While some filmgoers, no doubt, will carp about the melodramatic textures of the story, we see this film as a sensitive examination of the slow unspooling of authentic forgiveness. These things take time. Nothing can be rushed or taken for granted when one reaches out to another and dares to start afresh.

Special DVD features include: Commentary by the director, producer and editor; "The Making Of An Unfinished Life" featurette; "Training Bart the Bear" featurette; and Still gallery. 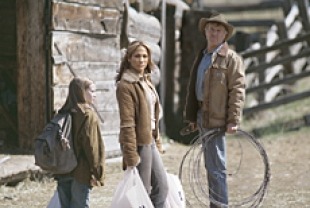