Refuge: An Unnatural History of Family and Place A Values & Visions Guide

"I am slowly, painfully discovering that my refuge is not found in my mother, my grandmother, or even the birds of Bear River. My refuge exists in my capacity to love. If I can learn to love death then I can begin to find refuge in change." So writes Terry Tempest Williams in her extraordinary spiritual memoir about a seven-year period during which she faced change, death, and destruction in her family and one of her favorite places in the natural world. She finds strength and meaning within her Mormon family circle and through her love of nature, especially birds.

Click here to read our review of Refuge: An Unnatural History of Family and Place. The following quotes and questions are designed to help you connect with Williams’ work and see its resonances in your own life.

On nature literacy: "A story keeps things known and in the case of the natural world few are literate. Have we felt the movement of snakes or experienced a happy tongue among huckleberries? Do we know the songs of native grasses or the prayers of migrating birds? We cannot confront the mysteries of life directly by involving ourselves patiently and quietly in the day-to-day dramas of the land. To ask a question and find a story about an episode of earth is to remember who we are. Wild rivers run through our veins." (from "The Storyteller" in Pieces of White Shell)

For Discussion and Reflection

1. Finding God in the Natural World

"I was raised to believe in a spirit world, that life exists before the earth and will continue to exist afterward, that each human being, bird, and bulrush, along with all other life forms had a spirit life before it came to dwell physically on the earth. Each occupied an assigned sphere of influence, each has a place and a purpose.

"It made sense to a child. And if the natural world was assigned spiritual values, then those days spent in wildness were sacred. We learned at an early age that God can be found wherever you are, especially outside. Family worship was not just relegated to Sunday in a chapel." (page 14)

"I love to watch gulls soar over the Great Basin. It is another trick of the lake to lure gulls inland. On days such as this, when my soul has been wrenched, the simplicity of flight and form above the lake untangles my grief.

3. Seeing Others through Death

"I feel like a potter trying to shape my life with the materials at hand. But my creation is internal. My vessel is my body, where I hold a space of healing for those I love. Each day becomes a firing, a further refinement of the potter's process.

"I must also learn to hold a space for myself, to not give everything away."(page 168)

"If we as Mormon women believe in God the Father and in his son, Jesus Christ, it is only logical that a Mother-in-Heaven balances the sacred triangle. I believe the Holy Ghost is female, although she has remained hidden, invisible, deprived of a body, she is the spirit that seeps into our hearts and directs us to the well. The 'still, small voice' I was taught to listen to as a child was 'the gift of the Holy Ghost.' Today I choose to recognize this presence as holy intuition, the gift of the Mother." (page 241)

7. A New Contract with the Earth

"The women couldn't bear it any longer. They were mothers. They had suffered labor pains but always under the promise of birth. The red hot pains beneath the desert promised death only, as each bomb became a stillborn. A contract had been made and broken between human beings and the land. A new contract was being drawn by the women, who understood the fate of the earth as their own." (page 288) 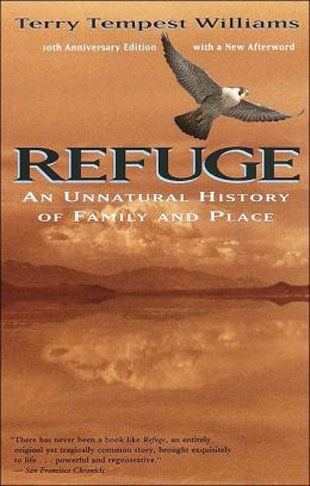