Friendship Teaches Us about Being Human Readings and Practices

Inspired by the friendship in the movie The King's speech, a collection on the spiritual practice of friendship.

The soul of friendship is located in honesty, respect, sharing, and loyalty. The making and the keeping of friends over the long haul of a lifetime is a spiritual practice requiring large reserves of diligence, patience, and nurturing. This life-enriching relationship, according to Eugene Kennedy, "is a process in which the ore of our humanity is sifted and refined so that the strengths and the weaknesses may be gradually neutralized."

This process is played out beautifully in The King's Speech, one of the Most Spiritually Literate Films of 2010. We see a relationship develop between a very temperamental Prince Albert, in line to be the King of England, and Lionel Logue, an unorthodox Australian speech therapist who takes on the challenge of helping him to stop stuttering. It is a sheer delight watching these two very different and strong-willed men create a special friendship. Lionel helps Prince Albert to claim his own voice and that is a priceless gift which only a true friend can give.

To enhance your experience and appreciation of the theme of friendship in The King's Speech, we have collected some resources: three excerpts, a spiritual practice, and a song playlist. In her book Among Friends, Letty Cottin Pogrebin writes: "From the rocking horse to the rocking chair, friendship keeps teaching us about being human." 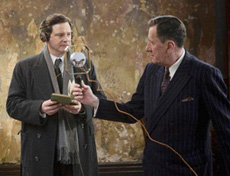