Quotes, teaching stories, book recommendations to honor these animals and the shelters and humane organizations that work for their welfare, plus our 25 favorite DVDs about dogs

National Dog Day, held every August, is a time to honor these animals and the shelters and humane organizations that work for their welfare. The event's organizers hope to raise awareness about the thousands of dogs that need to be rescued each year, and also to pay homage to the unconditional love, companionship and bravery that dogs bring to us on a daily basis.

"Everyone needs a spiritual guide: a minister, rabbi, counselor, wise friend, or therapist," writes Gary Kowalski in The Souls of Animals. "My own wise friend is my dog. He has deep knowledge to impart. He makes friends easily and doesn't hold a grudge. He enjoys simple pleasures and takes each day as it comes. Like a true Zen master he eats when he's hungry and sleeps when he's tired. He's not hung up about sex. Best of all, he befriends me with an unconditional love that human beings would do well to imitate."

Isn't that just the truth! Dogs are more than our best friends; they are companions on our spiritual journeys. We would do well to follow the example of indigenous peoples who don't recognize separating walls between the human and the animal kingdoms.

Whether you have a dog or just wish you did, you can show your support for these beings on their special day. Here are some ways to celebrate suggestions from www.NationalDogDay.com. Read our collections of quotes and teaching stories and book recommendations. Or pick up the DVD of one of these dog films — our 25 favorite films about the soulful side of canines.

Plus, one of our favorite excerpts from Spiritual Literacy on what we can learn from a dog: Gunilla Norris's tribute to her dog Putnam. 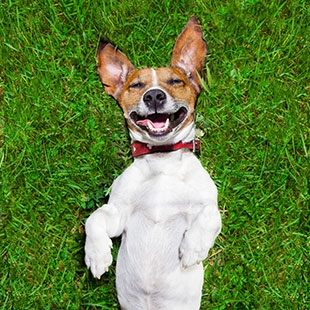