A day to remember the words and the actions of the civil rights leader and Nobel Peace Prize laureate.

Dr. Martin Luther King, Jr. (1929 - 1968) spoke to his own people and gave them hope — a sense of their inherent dignity and high destiny. He called other racial and ethnic groups to brotherhood and sisterhood — a caring concern for and commitment to others. King was a pioneer breaking down barriers, building bridges, and gathering us all together. His spirit lives on in those who strive to bring into being a more free, just, and peaceful world.

The Words of Martin Luther King, Jr. contains more than 120 quotations from the Nobel Peace Prize-winning activist's speeches, sermons, and writings. They are organized under seven areas: the community of man, racism, civil rights, justice and freedom, faith and feligion, nonviolence, and peace.

The Radical King, edited and introduced by Cornel West, is a substantive collection of 23 of King's sermons and speeches. This book is part of the multi-volume The King Legacy Series published by Beacon Press.

Here are seven quotes to ponder on this day. As you do, keep in mind the following comment by Coretta Scott King: "The greatest birthday gift my husband could receive is if people of all racial and ethnic backgrounds celebrated the holiday by performing individual acts of kindness through service to others."

Thou, Dear God, edited and introduced by Lewis V. Baldwin, is a compilation of 68 of Dr. King's prayers, organized into six sections: Prayers for Spiritual Guidance, for Special Occasions, in Times of Adversity, for Strength in Times of Trial, for Uncertain Times, and for Social Justice. Baldwin calls these prayers "an essential component of prophetic social witness, and as a vital ingredient in the overall effort to free, humanize, and empower humanity." Here are three excerpts from this compilation: 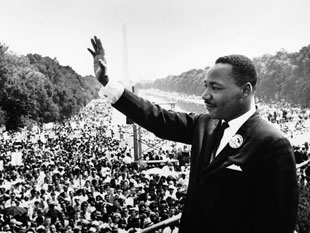