A day to follow the Lutheran theologian's advice that we give glory to God in the midst of life.

Dietrich Bonhoeffer, a Lutheran pastor and theologian, was born on this day in 1906. He received his doctoral degree from the University of Berlin at the age of 21. After living in Barcelona, Spain and the United States, Bonhoeffer returned to the same university in 1931 as a lecturer in theology. He helped organize the Pastor's Emergency League against the Nazi regime and was a leading spokesperson for the confessing church. Bonhoeffer actively participated in the German resistance movement and was arrested and later hanged after being implicated in a 1944 assassination attempt on Adolf Hitler.

In his revolutionary book Letters and Papers from Prison, Bonhoeffer proclaimed, "Jesus does not call men to religion but to life." God has trouble with us when we try so hard to be holy that we forget to be human. Bonhoeffer was convinced that the Holy One should be affirmed and celebrated in the midst of life:

"I should like to speak of God not on the borders of life, but at its center, not in weakness but in strength, not therefore in man's suffering and death, but in his life and prosperity."

Bonhoeffer urges us to bring God into all parts of our lives, including our moments of personal triumph, familial happiness, and solid joy in a job well done.

Contemplating this quotation by Bonhoeffer on prayer as "breathing alongside God."

Reading some of Bonhoeffer's writings. This collection is a very good one.

Watch the DVD of the award-winning film Bonhoeffer directed by Martin Doblmeier. 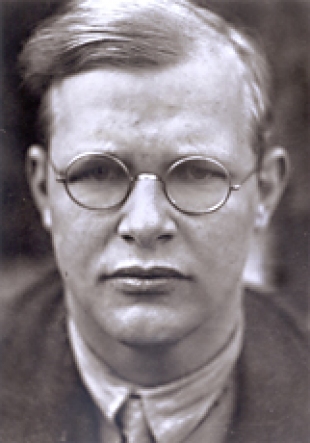