Feast Day of Our Lady of Guadalupe December 12

Annual feast day to mark the appearance of the Virgin Mary in 1531 and her significance to the poor of the world.

Our Lady of Guadalupe is the most significant religious symbol of Mexico and one of the pre-eminent female icons in the world. In 1531, the Virgin Mary, taking the features and attire of an Indian, appeared before Juan Diego and instructed him to tell the bishop to construct a shrine upon the spot on Mount Tepeyac. She healed his uncle and left her image imprinted on a cloak. The theologian Virgil Elizondo sees this as "a major moment in God's saving plan for humanity" that emphasizes mysticism rather than doctrine, compassion instead of competition, and justice for all instead of just for the rich. Megan McKenna in Spiritual Writings on Mary by Mary Ford Grabowsky writes of Our Lady of Guadalupe:

"This Mary is the woman of the land. She is sister to the poor and the mother of compassion and healing for all those who live on the edges of life, walking the roads on the outskirts of the cities, living in slums, favelas, tenements, and the neighborhoods [where] no one ever wants to get caught having to raise their children. . . . She is barefoot upon the earth; her presence causes roses to bloom in December and the birds to sing wildly and the land to bring forth its seed and bread for those desperate for daily sustenance (still more than 85 percent of the earth) and freedom. She can be a spider, as in the Native American tradition, who follows a trail home bringing light to the people, silent, unnoticed, so small and so able to steal the light from those who will not share it with others. She is the symbol of the small earth, inconsequential except to God, found with all those who live faithfully in situations of darkness, despair, lack and need, yet powerful in their very weakness and numbers."

Say a prayer today that Our Lady of Guadalupe may shed her light upon and grant strength and hope to all those who have lost their jobs, their homes, their security, and their confidence in a new and better life for their children. 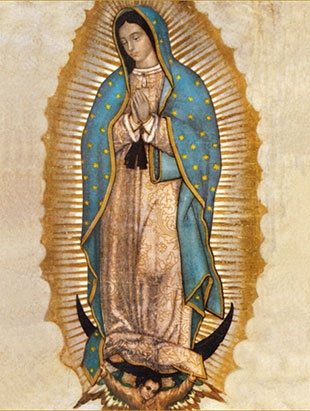