(PDP) Saluting Woody Guthrie's vagabond spirit and love of the underdog with his music and a film biography.

"I hate a song that makes you think you're not any good!" declared Woody Guthrie. "I am out to fight those kind of songs to my very last breath of air and my last drop of blood."

This gutsy and creative minstrel was born on this day in 1912. He spoke his mind through his songs and wrote more than 1000 of them — ballads about Dust Bowl refugees, love and hate, migrant workers, children, war and peace, unions, good times and bad times. Studs Terkel said of him: "Woody Guthrie, our own made-in-America product, ranks with Scotland's Robert Burns, with the Negroes' Huddie Ledbetter and Bill Broozy, and the famous Shakespeare himself as one of a handful of the world's greatest all time balladeers." His music is a kite to lift up our spirits and a sail to catch the onward rush of the winds.

Remember Woody Guthrie's remarkable life by viewing the 1976 biographical film Bound for Glory. It tells the story of this folk singer's early years. David Carradine as Woody captures his vagabond spirit and his love of the underdog.

Watch this YouTube video of Bruce Springsteen singing Guthrie's classic "This Land Is Your Land" during the Born in the U.S.A. tour. 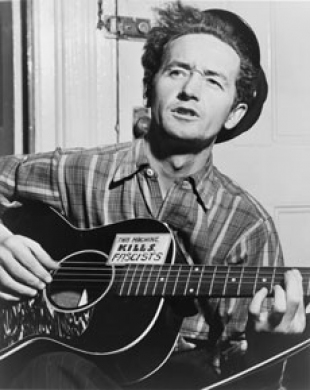