DVDs that celebrate the vital connection between grandparents and grandchildren.

In 2006, the first members of the baby boom generation, the wealthiest and best educated age cohort the world has ever known, began turning 60. National Grandparent's Day is a time to celebrate the ways in which grandparents can share their love, support, and wisdom across the generations. This is very much needed in our society when there is very little written on the subject of grandparenting. Many of these individuals, who have sought to maintain their independence and autonomy, now find themselves during hard economic times forced to re-evaluate their plans for the future or take in their financially strapped adult children and their kids. Other seniors are only intermittently involved in the intrafamily net. In this case, the losers are the young and the very old.

In Grandparents/Grandchildren: The Vital Connection, Arthur Kornhaber and Kenneth Woodward outline some important roles grandparents can play in the lives of their grandchildren such as:
1. Historian — Accenting family traditions and heritages
2. Mentor — Sharing wisdom accumulated through years of experience
3. Role Model — Preparing children for what it is like to be old and a grandparent
4. Wizard — Passing on a sense of wonder and the value of imagination
5. Nurturer — Helping to expand the grandchild's life support system

This vital connection between children and their grandparents is immediate and gratifying to both parties. Elders all need to be needed and kids deserve more unconditional love: it is a wonderful trade-off.

Here are a few of our favorite films about the close bond that can exist between kids and their grandparents:

Thomas Simons presents blessings that can be used in both formal and informal situations. Here is a gratitude ritual for Grandparent's Day. 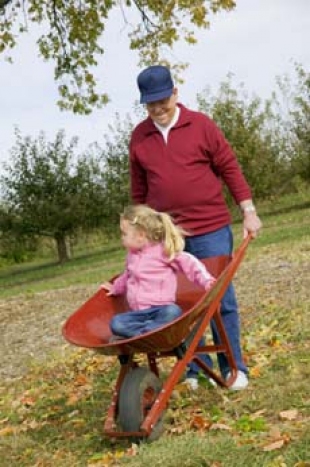