Inspiring quotes from the Catholic Pope, now Saint, who opened the door to the renewal of the church.

Saint John XXIII will forever be remembered as the man who humanized the role of Pope and opened the door to the renewal of the church. He explained: "We are not on earth to guard a museum, but to tend a blooming garden full of life."
There is an anecdote that perfectly conveys the humble spirit of Pope John XXIII. On the evening when he announced the opening of the Ecumenical Council, the first one since 1869, he couldn't get to sleep. Finally, he called himself to order: "Angelo, why aren't you sleeping? Who's running the church, you or the Holy Spirit? So sleep." And he did.

Prior to his being elected pope, Angelo Roncalli served as a clerical diplomat (Bulgaria, Turkey, and Greece), papal nuncio in Paris, and patriarch of Venice. This was all good training for dealing with social problems and the differences among peoples. While still an Archbishop, he noted: "Wherever I go I pay more attention to what we have in common than to what separates us."

Pope John XXIII began his mission by promising to be a "a good shepherd." He was the first pope in history to pay tribute to the part played by women in public life.

Here are some quotations which signify his open-mindedness and distinctive spiritual perspective. 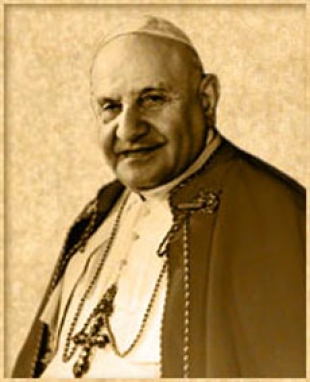