Prayers of remembrance for those who died in many wars and for reconciliation with those who also try to keep the peace in their own ways.

Memorial Day is observed on the last Monday in May in the United States. For many it's a time for picnics and barbeques and the official start of summer. But the day has a long and meaningful history. Originally called Decoration Day because of the practice of families bringing flowers and other decorations to grave sites, it is a day of remembrance for those who have died in the nation's service. It was officially proclaimed by General John Logan, national commander of the Grand Army of the Republic, and was first observed on May 30, 1868, when flowers were placed on the graves of Union and Confederate soldiers at Arlington National Cemetery. Since then it has been observed with parades, ceremonies at monuments, and the placing of flags on soldiers' graves in cemeteries.

In a 2011 article in The Sun Chronicle Online, the Rev. Ron Gagne, director of communications for the LaSalette Communications Center in Attleboro, Massachusetts, notes that the original purpose of this special day was reconciliation. At the end of the Civil War, it was a time for coming together to honor those who had made the ultimate sacrifice.

We'd like to see the dual purposes of this day — remembrance and reconciliation — resurrected. Here's how to name this day:

Read Ron Gagne's article in which he shares some passages from the writings of several faith traditions on the reverence, faith and values that Memorial Day engenders.

"Loving God, we pray to you for people of every race, religion, language and nation. Help us always to respect and love each other for You have made us all. Let those who have given their lives for the sake of justice, peace and freedom be rewarded by your generous love. May their families and friends, and we who honor them today, remember them with love, now and always. Amen"

We remember in our prayers this special day,

All those military personnel
who died during wartime,
putting their lives on the line
for their loved ones and the cause of freedom.
We are thankful to them
for trying to keep the peace
according to their inner lights.

We also cannot forget the many combatants
who died in the line of friendly fire
and the ordeal their families went through
to find out the truth.
We are thankful to them
for trying to keep the peace
according to their inner lights.

We are grateful for the bravery and
conviction of nonviolent men and women
who refused to go to war and
suffered the consequences of their stand.
We are thankful to them
for trying to keep the peace
according to their inner lights.

We respect all those resilient souls
who have spent their lives protesting
against war and paid the price
with their own loss of freedom.
We are thankful to them
for trying to keep the peace
according to their inner lights.

We mourn the deaths
of innocent civilians caught
in the crossfire of war.
We remember as well the animals,
plants, and waters destroyed by
the weapons of war.
All they wanted, all we wanted,
was for the combat to cease
so they could live with dignity.
We are thankful to them
for trying to keep the peace
according to their inner lights.

On this Memorial Day of
remembrance and reconciliation,
we are confident that God has taken
all these men, women, and beings
into Her warm embrace.
We hold them all in our hearts
and are thankful to them
for trying to keep the peace
according to their inner lights. 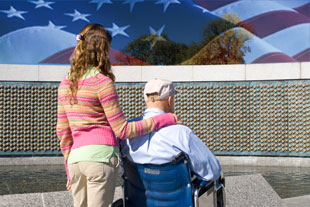