Remember and reflect on the life and writings of this former Secretary General of the United Nations.

Dag Hammarskjold (1905 - 1961) was born into an influential Swedish family; his father was a former prime minister. He studied law and economics after which he was offered the post of Swedish ambassador to the United Nations. Hammarskjold then was elected Secretary General, an honored but difficult role he played for eight years. On September 18, 1961, he died in a plane crash in central Africa. Praise came from around the world for his wisdom, devotion to duty, and his relentless search for peace in a time when nuclear war seemed on the horizon.

Shortly after his death, a just completed manuscript was discovered in his apartment and published as Markings. The journal entries and commentary by Hammarskjold often revolve around religious matters such as faith, meaning, duty, loneliness, and pride. On these pages, he reveals "my negotiations with myself and with God."

Think of Markings as a spiritual diary calling you into dialogue with it. Here are some quotations from the book. Pick the one that means the most to you and let it sink into your consciousness and simmer for a while. See what idea, projects, or ideals come to the surface asking you to act. 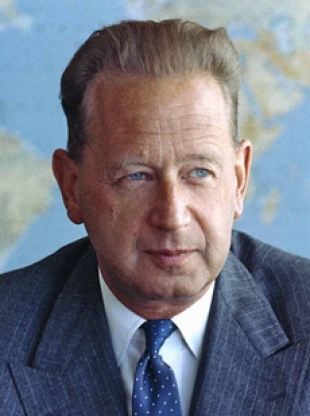