Fr. Philip Berrigan (1923 - 2002) dedicated his life to war resistance through active nonviolence. He and his brother, Fr. Daniel Berrigan, S.J., committed acts of civil disobedience which led to repeated imprisonment, eleven years in all for Philip.

Beginning adult life as an artillery officer in W.W.II, Fr. Philip Berrigan was ordained a priest in 1955 in the Josephite Order, which emphasized inner-city ministry. At the start of his nearly 40 years of peace demonstrations, he was the first Roman Catholic priest to participate in the early 1960s Freedom Rides to end segregation. Among the most notable of his war-resistance demonstrations were his burning of draft files as part of the Catonsville 9 and his obliterating of draft files with blood as part of the Baltimore 4. He denounced war as "a curse against God, the human family, and the earth itself."

Fr. Berrigan lived and worked as part of the Jonah House community, a model for the peaceful, sustainable community he envisioned as an alternative to the U. S. military-industrial complex and its production of weapons of mass destruction. In 1970 he left the priesthood and married activist nun Elizabeth McAlister, cofounder of Jonah House, who joined him in the pursuit of social justice and a world without war. Six books of Fr. Berrigan's provide detailed information about his actitivites, and his autobiography, Fighting the Lamb's War, sets forth his guiding principles in working for a disarmed world.

"The Biblical view of the law, the courts, and the state is profoundly radical. The Bible looks upon the state as a kind of rebellious artifice; it is spurious, a human creation in rebellion against God. ... The state, conceived in violence, and backed by violence, will never achieve true peace."
— Philip Berrigan in Fighting the Lamb's War

"We Christians forget (if we ever learned) that attempts to redress real or imagined injustice by violent means are merely another exercise in denial — denial of God and her nonviolence towards us, denial of love of neighbor, denial of laws essential to our being."
— Philip Berrigan in Fighting the Lamb's War

"I die with the conviction, held since 1968 and Catonsville, that nuclear weapons are the scourge of the earth; to mine for them, manufacture them, deploy them, use them, is a curse against God, the human family, and the earth itself."
— Philip Berrigan in his last statement before his death

Here is a short video of the Catonsville 9 -- including Philip Berrigan and his brother Daniel Berrigan -- setting fire to draft records and saying the Lord's Prayer in Catonsville, Maryland, on May 17, 1968. The audio portion starts at the 15-second mark:

What is one fearless thing you can do today in faith that God's love and mercy are stronger than any government? If you are stuck for ideas — this is, after all, a courageous lifelong practice — remember that you always have the option of speaking up for human rights through Amnesty International actions. As you can see in the video, people acting together and supporting each other increases courage and is a living demonstration of the fact that "we are all part of this." 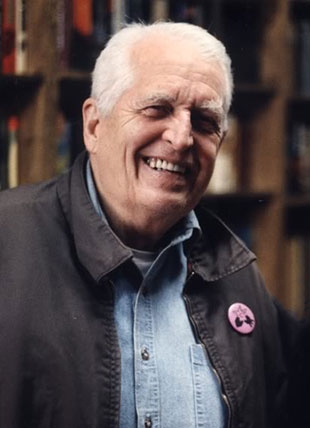