Birthday of Rose Hawthorne Lathrop May 20

Remembering the compassion of an unsung pioneer in the hospice movement.

Rose Hawthorne Lathrop (1851 - 1926), daughter of the great American author Nathaniel Hawthorne, came from a loving, privileged family. Yet she had many early encounters with suffering: she lost her only son at age five to diphtheria, struggled with her husband's alcoholism, and then witnessed her friend Emma Lazarus' (famous for the inscription on the Statue of Liberty) battle with cancer.

Such grievous and radically demanding circumstances are the very recipe for bitterness ... or for heroism. Rose chose the latter. At 45 years old, she enrolled in nurse's training after learning from her priest that a poor seamstress who became afflicted with cancer — thought at the time to be contagious — had no way to maintain an income and was sent away to die in an almshouse without medical care. Describing her realization that she wanted to leave behind the frivolities of "society" life and devote her life to helping people who had cancer, she wrote: "A fire was then lighted in my heart, where it still burns ... I set my whole being to endeavor to bring consolation to the cancerous poor."

She spent the second half of her life providing loving care, companionship, and a sense of dignity to impoverished, terminally ill patients. She became a Roman Catholic religious sister, taking the name Mother Mary Alphonsa, and established the Servants of Relief for Incurable Cancer, which continues to this day to provide invaluable, free services. From the Sisters of Charity of Saint Vincent de Paul in Wellesley Hills, Massachusetts, she borrowed this motto to describe her mission: "I am for God and the poor."

"I tried to acquire a fondness for the very poor, and I finally came to like them very much if they were rather good. But I was not satisfied with liking them; I wanted to love all the poor whom I met."
— quoted in Robert Ellsberg's All Saints

"The last time I saw [my father], he was leaving the house to take the journey for his health which led suddenly to the next world. My mother was to go to the station with him, -- she who, at the moment when it was said that he died, staggered and groaned, though so far from him, telling us that something seemed to be sapping all her strength; I could hardly bear to let my eyes rest upon her shrunken, suffering form on this day of farewell. My father certainly knew, what she vaguely felt, that he would never return. ... He stood for a moment gazing at me. My mother sobbed, as she walked beside him to the carriage. We have missed him in the sunshine, in the storm, in the twilight, ever since."
— in Memories of Hawthorne

"[Rose Hawthorne] realized that she could 'take the lowest class both in poverty and suffering (the cancerous poor) and put them in such a condition, that if our Lord knocked at the door we would not be ashamed to show what we had done.'"
— on Hawthorne-Dominicans.org

Reflect on your own encounters with suffering and crises. Br. David Steindl-Rast observes that what makes a crisis so dangerous is that at every step we could forget that a crisis is something we should go through. If we forget that, we will be at an impasse and be shattered already; it won't even be a crisis but a dead-end. In what ways can the life of Rose Hawthorne remind you how to avoid this danger and face suffering with loving creativity? 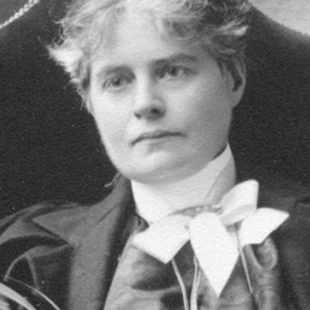