(PDP) Perspectives on the use of deadly force against protestors, in remembrance of those gunned down at Kent State.

Each year on May 4 students, activists, and survivors gather at Kent State University in Ohio to mark the anniversary of the day in 1970 when members of the Ohio National Guard shot and killed four students who were peacefully demonstrating against the Vietnam War. Nine students, including one who suffered permanent paralysis, were wounded.

The deaths at Kent State did not take place in a vacuum. Fear, mistrust, and hatred over the war in Vietnam had been heating up the atmosphere for some time before that fateful Monday when violence erupted. The shootings set off a national discussion about the government responding to protesters with deadly force. 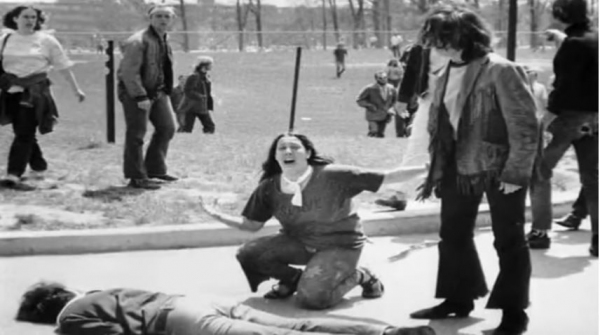 Kent State which aired on NBC Television as a four-hour drama, is available as a Warner Bros. DVD. It chronicles the personal stories of the students, National Guardsmen, political figures, and university officials who were caught up in the volatile events from April 30 through May 4.

Gerald Green (Holocaust) and Richard Kramer wrote the screenplay based on two books, Kent State by James A. Michener and The Kent State Coverup by Joseph Kelner and James Munves, as well as articles, research studies, and interviews. It reveals how public opinion was divided over who was to blame: some charged that the guardsmen committed outright murder; others argued that the students instigated the violence; still others saw it as an accident.

What happened at Kent State was not an isolated incident. There have been violent clashes between authority figures and protestors throughout American history. Organize a group — among friends, classmates, members of your congregation or community group — to talk what we can learn from Kent State. Here are some discussion prompts.

In Our Time: The 1970 Commission on Campus Unrest, set up by President Richard Nixon after the shootings at Kent State, called for a calming of "the rhetoric of both public officials and protestors whose words ... have too often helped divide the counry, rather than unite it." Talk about other incidents in American history, especially in our own times, when reckless and inflammatory language has been used to turn people against each other.

Attitudes towards Violence: Clarify your attitudes toward violence using the statements below. Rate each on a scale of 1 (strongly agree) to 5 (strongly disagree). Then take a sampling of responses from your group.

a. All human beings are, by nature, violent.
b. People are naturally caring and cooperative. Violence has to be taught.
c. The police frequently use more force than is necessary to carry out their duties.
d. What young people need most to keep them in line is physical punishment.
e. Violence can never be used to a positive end, whereas nonviolence can.
f. The gap between generational views about the use of violence in heated political situations is troubling.

Official Violence: The following statement was issued by the wounded students and families of the dead at Kent State:

"We have become convinced that the issue of excessive use of force — by law enforcement agencies or those acting with the authority of law enforcement agencies — is a critical national issue to which the attention of the American people must be drawn. ... We believe the average American is little aware of the official violence which has been used across our land indiscriminately and unjustifiably."

Share your reaction to this statement, both in terms of the Kent State tragedy and more recent examples of deaths due to official violence.

In her highly ethical and thought-provoking book Beyond Vengeance, Beyond Duality, Sylvia Clute calls for a compassionate revolution. Here is a spiritual perspective that addresses many of the issues facing us today: dualistic thinking that pits us versus them, winners versus losers, and insiders versus outsiders; fear-based responses to scary situations; and tremendous energy being expended on building attacks against perceived enemies. In contrast to "punitive justice," she advocates "unitive justice" which promotes inclusiveness; aims for healing and reconciliation; and desires relationships that are harmonious, equitable, and peaceful.

With your group (or in your journal), sketch out a vision for a society based on unitive justice rather than duality consciousness. How would it respond to protests and dissent? How would people be encouraged to respect and protect those with whom they disagreed? As you contemplate your unity with others, remember what Zen teacher Paul Reps said, "We all have the same colored bones."