(PDP) Remembering the woman whose bestseller swayed public opinion against slavery and helped precipitate the outbreak of the Civil War.

Harriett Beecher Stowe was born on June 14, 1811 in Litchfield, Connecticut, to a family that eventually grew to encompass thirteen siblings after her mother died and her father remarried. A New Englander through and though — later in life she wrote nostalgic novels extolling regional life — Stowe spent a formative period in the Midwest with her father Lyman Beecher; with him, she founded the Western Female Institute in Cincinnati, Ohio, in order to encourage Christian values in Western settlers. Stowe’s was a family of Protestant reformers, educators and ministers mainly, and Stowe herself fully inhabited that role upon the publication of her abolitionist novel Uncle Tom’s Cabin; or, Life Among the Lowly.

When the Fugitive Slave Act made slavery the law of the land, not just the South’s “peculiar Institution,” Stowe, like many Americans, was outraged. She channeled this outrage into the sentimental and overtly political story of Uncle Tom’s Cabin. Published serially in an abolitionist journal and then in book form, the immediate bestseller did much to sway public opinion against slavery. However, it also precipitated the sectional tensions that led to the outbreak of the Civil War, an outcome opposite from her hopes: Her purpose in writing was to inspire voluntary emancipation from slavery by detailing the cruelty and suffering inherent in this evil institution.

In the latter half of the nineteenth century, Stowe’s novel was outsold only by the Bible and made her a worldwide celebrity and voice for change. She parlayed this acclaim into a robust career, writing a compendium to Uncle Tom’s Cabin, another anti-slavery novel, and several novels of New England culture and history. Stowe died in 1886 just east of where she was born, in Hartford, Connecticut.

Connecting Talents and Justice: Legend has it that Stowe met Abraham Lincoln at the beginning of the Civil War. Appraising her, Lincoln is supposed to have said, “So this is the little lady who started this great war.” Much as Stowe had hoped her words would lead to a peaceful resolution to the nation’s conflict, Lincoln’s comment is a testament to the power of personal talent combined with a just cause. Where do your talents and your deepest convictions meet? How could that convergence lead to progress? What would you like a powerful leader to say, appraising your effect on the nation?

Moving Forward through Shared Values: Stowe’s narrative argument against slavery hinges on values cherished on both sides of the sectional conflict: domesticity and Christian virtues. Uncle Tom’s Cabin presents slavery as a violation of the sanctity of the family and a threat to Christian values of charity and mercy. What are the shared values that sustain your country now despite differences in religion, race, culture, region, politics, etc.? How can you embody these, communicate them across difference, and open up channels of understanding and solidarity? 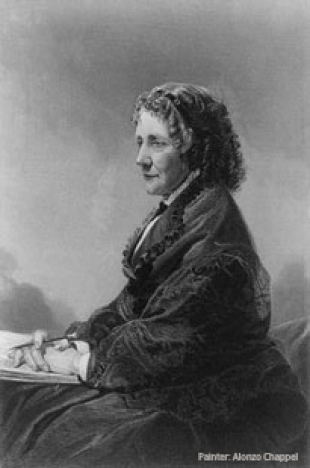