(PDP) Honoring a visionary at the front lines of the global justice movement.

Starhawk was born Miriam Simos on June 17, 1951 in St. Paul Minnesota. A teacher, writer, and activist, she presents in all of her work an integrated critique of the sexual, social, economic, and political systems that make individuals and communities unhealthy. A visionary who sees the problem as the solution, Starhawk is ever moving towards hope, combining her feminism, earth-based spirituality, commitment to nonviolence, and environmentalism into programs capable of healing earth’s wounds.

One such program is permaculture. As an environmental activist, Starhawk has been a leading teacher and practitioner in the permaculture movement, a hope-filled attempt to reclaim land blighted by extraction and degradation. Permaculture (permanent + culture) takes its cues from the ecosystem itself, designing agricultural practices and social relations according to the patterns found in nature.

As a peace activist and writer, Starhawk travels the world giving workshops and reporting on nonviolent movements. In 1993, she published the post-apocalyptic novel The Fifth Sacred Thing, which poses in narrative form a question central to nonviolent movements: How can a peaceful society defend itself in the event of attack without either being taken over or losing its identity by fighting back? The unfolding of the answer makes The Fifth Sacred Thing a beloved novel with a cult following. Since its publication, Starhawk has written both a prequel (Walking to Mercury in 1996) and most recently a sequel (City of Refuge in 2016). She has also published many volumes of nonfiction that empower people to pick up the ball of earth-cherishing spirituality that has been developed over the ages by many indigenous cultures.

Seeing the Divine Differently: Starhawk’s feminist spirituality challenges us to consider how our image of the divine changes our sense of what is possible in the world. For instance, our view of the divine changes if we imagine God as female and even in a female body. Take a few moments today to think about how your mind engenders or embodies the divine. Then change some of these attributes and notice what new ideas and feelings come into view.

Accompanying Your "No" with a "Yes": Starhawk’s activism and writing are fundamentally hopeful, holding out evidence of progress and practical steps forward as an antidote to despair. She encourages people to always accompany their "no" with a "yes," to pair critique with affirmation. Today, challenge yourself to come up with a "yes" each time you say "no." Don’t stop at "no"! Take the next step that transforms a problem into a solution. 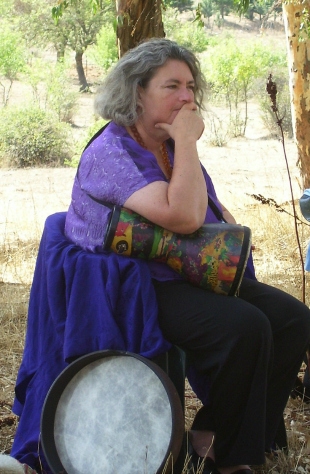