Many of the core values of American democracy come from the beginning of the U. S. Constitution: "We the people of the United States, in order to form a more perfect union, establish justice, insure domestic tranquility … promote the general welfare, and secure the blessings of liberty to ourselves and our posterity … establish this Constitution." These words encourage care not only in today's world but also on behalf of future generations. And key to this commitment is environmental stewardship.

This sort of stewardship involves conservation and sustainable practices. It requires reducing harmful impacts that humans have on the natural world; it also entails using human intelligence and resources like technology to preserve the rights, welfare, and life of all species and all people. Whether we are concerned with air quality, clean water, greenhouse gases, or other environmental issues, the actions of individuals and groups impact each other. In a sense, our citizenship doesn’t begin and end with being American. As humans we have many forms of dependency that go beyond our nation’s borders and the existence of our own species.

Take our trash. The United States is #1 in the world in trash production; we produce about 262 million tons per year, not including hazardous waste, industrial waste, and construction waste. What happens to all the municipal solid waste we produce? While some of this waste is incinerated, some is composted, and some is recycled, the most recent Environmental Protection Agency reports indicate that 52.5% of U.S. waste goes into landfills, resulting in methane emissions (releasing a greenhouse gas into the atmosphere). Many landfills leach hazardous materials into the soil and groundwater. Much of the waste that goes into landfills is electronic (televisions, computer monitors, batteries, lightbulbs), most of which have a high lead content. U.S. landfills also have other metals, like mercury, that are hazardous to both the environment and to human health.

In the past, a high percentage of U.S. waste was shipped to Asian countries, primarily China. China banned the import of foreign garbage as a threat to its environment and public health. Consequently, much of the waste we think is recycled is incinerated or put in landfills. Some cities, like New York City and San Francisco, have plans to send no waste to landfills and are implementing innovative programs for composting, banning Styrofoam containers and plastic bags, and taking other ecologically sound steps. Most, however, send far more trash to the landfill than is recycled.

— Habib Todd Boerger in Practicing Democracy with the Earth 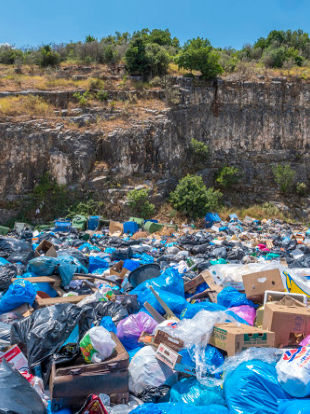