George Caleb Bingham was born on March 20, 1811, in Augusta County, Virginia. The family moved in 1819 to Missouri Territory where George grew up. He taught himself to paint and when he moved to St. Louis in 1836, he opened a portrait studio. He also developed a deep interest in politics and became convinced that he should speak out against slavery, which he regarded as an immoral threat to the Union.

In 1948, Bingham was elected to the Missouri House of Representatives, becoming one of the few artists to serve in elected political office. He was named Missouri state treasurer in 1862, an office he held for three years.

Although portrait painting was Bingham's bread-and-butter art, by far the most unusual and fascinating paintings done by Bingham were designed to spread his ideal of free people and free institutions. Most famous of these are his Election Series.

The first of this trio of paintings is The County Election (1852). It reveals the spunk and energy of individuals getting ready to vote after playing games (notice the two men tossing a coin). This chaos represents the darker side to voting that many citizens are willing to entertain. 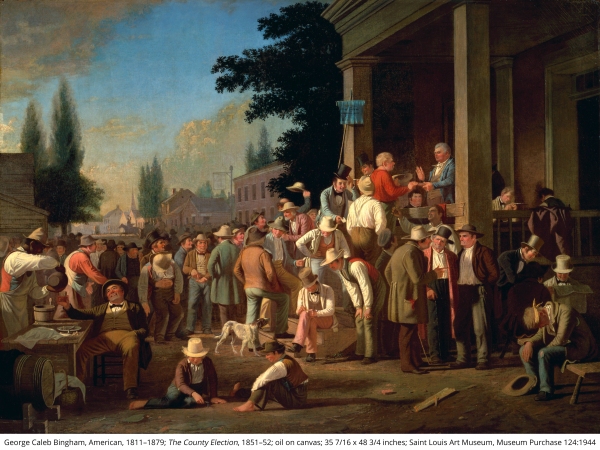 Bingham continues his depiction of the unruly sides of voting in Stump Speaking (1853 – 1854) in the persona of three men dressed in white who represent the present, past and future of American politics. 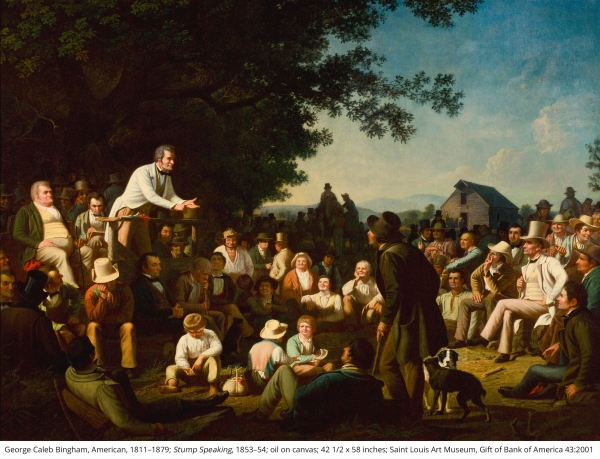 The last painting of Bingham's Election Series is titled The Verdict of the People (1854 – 1855). It reveals the rough and tumble political life of the frontier. 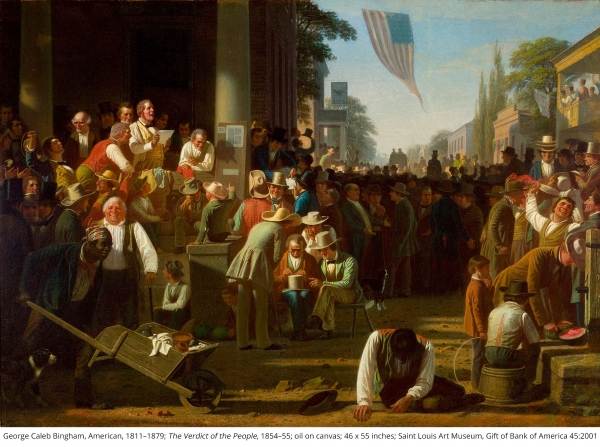 All three of these very detailed paintings fit in perfectly with our Practicing Democracy Project, encouraging reflection on politics, voting, freedom, and meaning.

In Now! The Art of Being Truly Present, Jean Smith offers some thoughts on politics, followed by a mindfulness gatha.

"If politics is dirty, it is our responsibility to change it. Only an informed electorate that casts its ballot can ensure that politicians truly govern by the consent of the governed, rather than the few who have the loudest voices or make the largest campaign contributions. In recent decades, fewer than 20 percent of registered voters [in the United States] usually participate in primary elections. When we do not inform ourselves about issues and the differences among candidates, communicate with elected officials, and vote, we have no right to complain about politics. We are part of the problem, because ignorance and apathy are paths of harming.

"In mindful gratitude
for such freedom as I have,
may I overcome
ignorance and apathy
and become a force for good."

Study Bingham's Election Series and share it with a friend. Which of the characters in the paintings seems most like you? Give a reason for your answer. In what ways can you become "a force for good" during the next election season?

Voting as a Spiritual Practice