By Ang Lee, James Schamus
A wonderful resource for all lovers of film.

Here is a wonderful resource for all lovers of this innovative film. In a preface, director Ang Lee refers to the Taoist textures of the drama. Time magazine critic Richard Corliss in his introduction calls Crouching Tiger, Hidden Dragon a "blending, not a collision, of Eastern physical grace and Western intensity of performance, of Hong Kong kung-fu directness and British attention to behavioral nuance." Film scholar David Bordwell presents a handy and succinct history of the martial arts tale in China and delineates the meaning of the wuxia pian — drama of martial chivalry. And screenplay writer James Schamus notes that Crouching Tiger, Hidden Dragon is not "a kung fu movie that we associate with street fighting. This movie is more about inner strength and centeredness."

The entire screenplay is presented along with 90 full color photographs, a plot synopsis, full biographies of the filmmakers, and sidebar pieces on the wire work, location shooting in China, and observations by the major actors on the drama. I was glad to take a closer look at some of the pivotal scenes between Li and Jen, especially the one where he tells her: "Now give yourself up and find yourself again. There is a lesson for you." This companion volume to Crouching Tiger, Hidden Dragon reveals the richness and the depth of this extraordinary film. 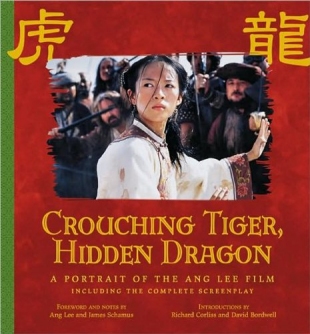