By Agnes Varda, JR
A playful and wonder-drenched documentary about an unusual creative collaboration.

In his book Ode to the Human Face artist Frederick Franck showed us a batch of small clay faces he created with just his thumb and forefinger. They have a strikingly raw beauty and convey a wide range of emotions. Paging through the book, you are bound to recognize a feature or expression from someone you know — the slightly downturned mouth, an upturned nose, hollow eyes.

To Franck these faces are more than portraits, they are icons. He explained:

"I felt them to be directly related to my lifelong intense preoccupation with the meaning of being born human, in other words: Who am I? Who are you?"

When Franck looked at these visages, he saw more than an individual's features, he also caught a glimpse of all the emotions that link us with other human beings in ties which are deeply spiritual and richly meaningful.

We recalled Franck's book and vision when we saw Faces Places. The filmmakers display a similar awe for images that convey emotions and make a statement. 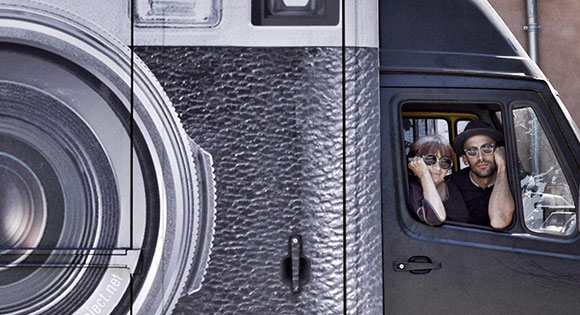 Agnès Varda is a prolific member of New Wave French Cinema who at 89 years old is still caught up in the creativity and wonder of her craft. JR is a 34-year-old photographer and visual artist. They decide to collaborate on an art project and make a film of their adventure. They travel through rural France pondering the faces of ordinary people, the places that nurture or diminish them, the joy of cross-generational sharing, the impermanence of life, and the vagaries of memory. Their work delights all who come in contact with it. 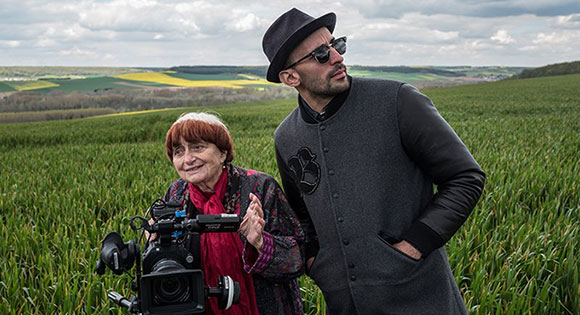 JR is a playful artist who drives a van which doubles as a photo booth. It can dispense large-format portraits of people he encounters on the road. With a crew of helpers, he pastes some of these huge images on the sides of houses, train cars, ships, and other places.

For example, coming across a row of abandoned houses, he covers the fronts with images of miners who used to live there and one woman who still does. After taking pictures at a fish market, he pastes huge blow-ups of fish on a water tower, noting "The fish are happy now; they are living the high life." The side of a barn boasts a picture of the farmer. At the dock, they ask three of the workers' wives to pose, then paste huge images of them on containers stacked at the entrance; they are like three female totems at the gates of a world of men. 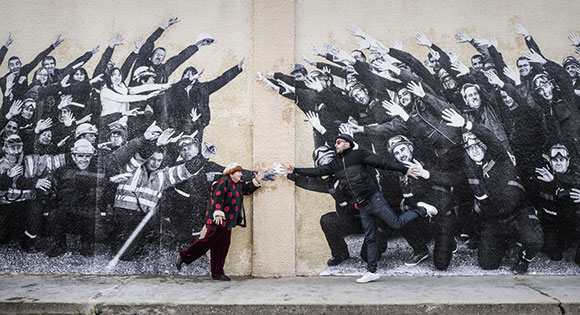 Whereas the youthful JR is content to savor the discoveries that abound in the acts of his imagination, Varda is interested in revisiting some images from her past. As an elder she wants to makes sure these faces and places don't "fall into the holes of my memory."

Both Varda and JR are interested in the power of the imagination, and they are successful in getting others to help them express their creative spirits. Again, we are reminded of Frederick Franck. His motto was "The meaning of life is to see." Varda and JR would agree. Everything, they say, depends on how one sees things. 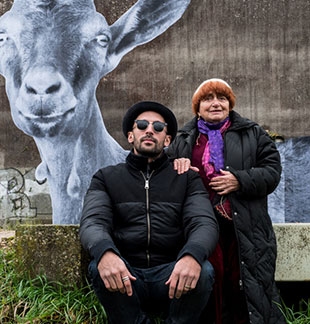