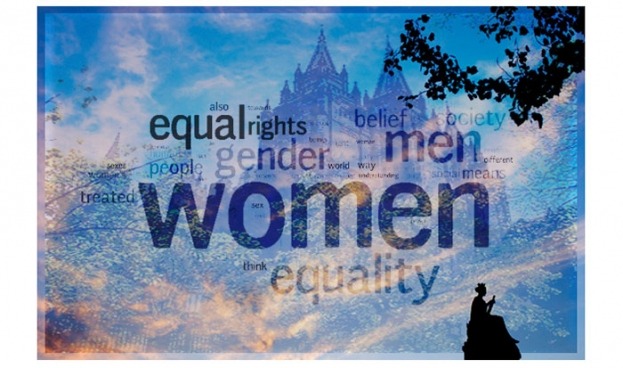 Growing Up Mormon and Feminist

By Kacey Sorenson for KidSpirit’s issue on The Soul of Gender.

What does your faith or wisdom tradition teach you about gender roles, particularly the positive aspects?

I am a Mormon female. My dad was my local church’s Bishop for five years. As a result, I was the “Bishop’s daughter” — categorized and occasionally referred to as such — for six years.

It bothered me sometimes because I knew I was more than just my father’s daughter, but still I was proud of his leadership position and my family’s position in The Church of Jesus Christ of Latter-day Saints.

My mom raised me to love being a girl in the twenty-first century, and I am proud to have had the same opportunities as boys my own age in sports, music, and extracurricular activities. My mother is a little bit of a feminist, priding herself in her independence and education, having graduated from a respected four-year university. While she agrees with me that being a parent is the most important role one can play, she still reminisces: “I was seven when Title IX was passed. I played on an all-boys soccer team at school and was the only girl at the local sports camp that year.” Title IX was passed in 1972, and is the federal law prohibiting sex discrimination in educational institutions. While I am sometimes irritated at her pride, I also absorbed her love of and confidence in being a young woman. Once, curious to learn more about what she always mentioned, I researched Title IX, gave a six-page report, conducted a one-hour interview with Stanford women’s basketball coach Tara VanDerveer, and compiled a Powerpoint presentation discussing the impact such a movement had on the modern woman. In other words, my mother’s modern views on women have impacted many of mine.

In the Mormon religion, men are placed in roles that receive greater attention than the roles of women. Women are taught their highest calling in life is to raise a family in God’s church with morals and principles worthy of God’s children. Young men are strongly encouraged to embark on a mission, a two-year venture where they are called to teach God’s word. Young women are also given the opportunity to serve full-time missions, but the expectation to serve is not as intense.

Traditionally, young men could embark on a mission at 19, while women were not allowed to leave until they were 21. There were different (and somewhat archaic) reasons for such age restrictions: young men needed to grow up on the mission, young women needed to grow up before. Honestly, I never really understood the difference in age limitations. In October of last year, Thomas S. Monson, the president of the Mormon church, announced a decision to lower the age of male missionaries from 19 to 18 years old. In the same speech, Monson revealed the young women’s age to serve a mission had also been lowered from 21 to 19. In a press conference two weeks later, church spokesman Michael Purdy said that within the first two weeks of Monson’s unexpected declaration, the church began receiving nearly five times as many applications from youth to serve as missionaries for the church — from 700 applications a week to over 4,000 — noting that “slightly more than half of the applicants are women.” Although there is still a year’s gap between the ages of our missionaries, it is clear women are experiencing a more equal opportunity to proselytize for the church at a younger age.

From the time we can first sing, Mormon kids are taught the Articles of Faith by rote. These articles are 13 statements similar to the Ten Commandments, and are basic teachings and ordinances of the Mormon faith. While often repeated mindlessly, the words of the last Article remind me of who I am: “We believe in being honest, true, chaste, benevolent, virtuous, and in doing good to all men… If there is anything virtuous, lovely, or of good report, we seek after these things.” These principles are taught in the church universally. They encourage trust and equality between God’s children, and show what is important to the church. I have been taught to love myself and to love others. I have learned to be an example to those who surround me, including, and especially, young men my age. As most teenagers do, guys my age observe the behaviors of their friends and peers, and want to fit in. They find strength in numbers, and by being an example, we can be strong together.

Now, there are always arguments about religion, and they can sometimes be very heated. I thought my mom, being intelligent, confident, stubborn, and a feminist, might have some opposition to a woman’s role in the Mormon church. I approached cautiously and a little nervously, but I was surprised to hear her answer to my question: “I’ve never had a problem with my role as a Mormon female. I’m a mom, and that is the most critical job on earth. Mormon men may administer the church, but women have the bigger and better job.” After she spoke, I realized I agree. My view may differ slightly from some of my unreligious peers, but I know my role as an eventual wife and mother will be fulfilling. I still strive for achievement through higher education, but I also feel the most valuable thing I can do is to be a mother. Of course not all women can have or want children: my aunt never married (and therefore never had children), and one of the women I admire the most recently found out she can’t have children. These women receive the same support and love from the church as those with children.

Gordon B. Hinckley, the president of the church until his death in 2008, summarized this view when he said: “The men hold the priesthood, yes. But my wife is my companion. In this church the man neither walks ahead of his wife nor behind his wife but at her side. They are co-equals in this life in a great enterprise.” Although the men and the women are treated differently within the church, they are still viewed as equal — to others and to each other. That feminist blood my mother and I are so proud of remains an integral part of who we are, but the strength of the woman is only magnified by the strength of the mother, a role I hope to take on when I am older.

When Kacey wrote this article, she was a junior at Miramonte High School in the San Francisco Bay Area. In her free time, she loves participating in choir, volleyball, and spending time with family and friends.