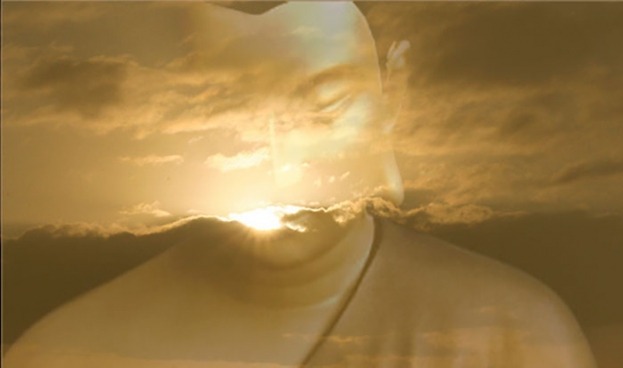 An Unexpected Path to Heroism

By Sharon Lin for KidSpirit’s issue on The Heroic Spirit.

What does your faith or wisdom tradition teach you about heroism?

My path to Buddhism was not without unexpected twists.

Born into a family in religious flux, I often echoed my elders’ teachings, whether it was to heed the wisdom of the Buddha, honor my ancestors, or kowtow to the heavenly gods and goddesses that decorated our traditional silken red altar. While my grandparents had grown up with a strict Buddhist upbringing, my parents — first-generation Americans — had looser spirits about Buddhist practice.

Unlike many other children my age, I was raised primarily by my grandparents, in their cozy apartment in the middle of Queens. My toddler years were filled with innocence and a curiosity to observe everything around me. I can remember every morning waking up to find my grandma on her knees by the altar, upon which an assortment of oranges, jujubes, peanut-covered glutinous rice balls, and golden coins rested. The hypnotic chants of monks would fill the air as the incense closed in on me, and tentatively I’d take a seat beside her to observe this early morning ritual. As I listened to my grandmother’s tales of the past, brave heroes and stubborn children, compassion and tolerance, I paid them little mind. Little did I know they would become so much more.

My parents decided that when I was a tender four years old, I’d had enough of the carefree lifestyle I was living in New York, and they brought me back to our one-family home in the suburbs of New Jersey. Considerably more open, with more grass to run across, more sunlight to soak up, and more breezes to caress my face as I ran, I forgot, for the most part, my brief encounter with Buddhism. In fact, if it weren’t for our family reunions, I’d have become so Americanized that even the onset of Chinese New Year would bring nothing more than the shame of forgetting the double meanings of half the dishes on the table.

It wasn’t until I was 12 years old that I rediscovered my roots. The circumstances couldn’t have been more coincidental. My mother decided that I needed to learn to take responsibility for my own actions and that I ought to start volunteering in my community. My

friends were into Girl Scouts, so my idea of community service was setting up a booth with some friends outside an IHOP and trying to convince a few passersby to buy boxes of cookies. What I had definitely not expected was to be signed up for kitchen duty at a small Buddhist temple in Flushing, Queens.

The Ch’an Meditation Center was basically a place for Buddhists and non-Buddhists to meet and discover their full spiritual potential. I was greeted by several monks, invited to attend a chanting and lecture on the Dharma Sutra, and to participate in a kowtow to the bodhisattvas — enlightened beings who have refrained from attaining the ultimate peace in order to bring others to enlightenment, called nirvana. It was a transcendent experience like no other. Before the day was even over, I was reveling in a new philosophy: the Ch’an Buddhist philosophy, which praises virtues and compassion along with encouraging self-reliance and discovery.

Many may be unfamiliar with the Ch’an tradition, but Westerners can recognize it as the predecessor to the more widely known Zen. A branch of the Mahayana Buddhism, it exists mainly as the Chinese tradition, with emphasis on three trainings: the training of virtue and discipline in the precepts (the Buddhist code of ethics), the training in meditation, and the training in recorded teachings. Apart from the self-inquiry and meditative exercises, however, one of the most important lessons I’ve learned from the venerable monks at Ch’an focuses on heroism.

How does one define heroism? In the simplest sense, Ch’an Buddhism calls for great bravery and courage. As many before me have experienced, the road that a Buddhist takes is not easy. True heroes do not wait for others to make choices for them. They take their own actions into consideration, and determine their own futures. In fact, one of the greatest heroes of history is His Holiness the current Dalai Lama of Tibet, of the Tibetan Buddhist tradition. Born Tenzin Gyatso, the future Dalai Lama lived in a time of much political turmoil. In the 1950s, when Communist China took over his home land of Tibet, he was forced into exile. For nearly four decades, Gyatso wandered, seeking help for the people of his land. From his compassion and unparalleled courage to confront prominent political leaders, he was able to preserve aspects of Tibetan culture that might have otherwise been lost.

Heroes are not simply people who care for themselves, they are compassionate. Rather than retreating in times of trouble, a true hero is able to see past their problems and reach out to lend others a hand. Compassion, one of the greatest virtues of Buddhism, teaches us to help others. No matter how terrible the situation may seem or how impossibly low a person may sink, there is always forgiveness. We must always give others a second chance. By being a person who forgives and moves on, we are being our own heroes. There is no shame in forgiveness, but there are great repercussions that come with hypocrisy and breeding negative feelings. The universal Golden Rule teaches us to do unto others as we would like others to do unto us. By banishing preconceptions, we can strengthen our kinship with those around us, forming a bond of brotherhood. After all, the true source of courage is in the heart. Only by opening our hearts to others can we understand their pain and find a way to help them along, rather than fighting or being indifferent to them.

One of the most important parts of being a Buddhist is finding your own path in life. Among the Buddha’s great teachings is the Noble Eightfold Path, which provides guidelines to the path to end suffering. Through wisdom, ethical conduct, and moral development, one is able to discover oneself amidst the chaos that is life. An ethical practice in Buddhism is called “the dedication of merit.” In simple terms, it is the attribution of our good deeds with blessings and goodwill. While doing good deeds is certainly

commendable, Buddhists understand that the ultimate act of unparalleled goodness comes from the heart, not the mind. Dedicating the merit of our deeds to the awakening of all beings — the enlightenment that all Buddhists seek — is the ultimate goal. For instance, it is not unusual for us mortals to praise the generosity of others. However, what Ch’an Buddhists strive to attain is not simply a heroic act of compassion. Even more important are the implications of the act of generosity, both within the self and the outside world. Declaring the merit of an action can be as simple as donating a dollar to the American Red Cross and dedicating it to a loved one suffering from a disease. Because the intention is well placed, something tangible is to be gained and thus the person has taken action on the spiritual path towards discovery.

An essential quality for every hero is to be a role model for others. Those who are too focused on their own needs rarely think beyond the issues of the present, but someone who is open to others and shows an openness to share the emotions of others is a true hero. Heroes are not people without flaws, though, that would create a false image, and there is no such concept in Buddhism. A person’s flaws show how even those with the best intentions do not always succeed. Heroism is the line that separates those who will persevere in their mission from those who are too weak to endure the pain of failure.

Though I can already relate many more teachings of the Ch’an tradition to my personal life, I still have much to learn. Buddhism is a path that does not end in one lifetime — the joy of traveling along the journey to end suffering is every bit as important as reaching the ultimate goal. Ch’an Buddhists believe that everyone has the potential to become a Buddha and realize their true nature, and that there is always forgiveness even in the face of failure. The Buddha taught that one must have compassion for all sentient beings. In other words, personal gain is irrelevant when there is the chance to help others. Any good deed causes an unequivocal inner surge of happiness. The Ch’an practice has taught me to appreciate the small blessings that surround me, and to lend a hand when I can, regardless of the consequences. Compassion is not simply an objective of life; in order to help others, we must begin by becoming our own heroes.

Do I regret my late start in Buddhism? Perhaps, but I am equally grateful that I was given the chance to discover for myself the joy of spreading compassion. Maybe it was more than a coincidence that my first encounter with volunteer work led to my discovery of a philosophy that continues to broaden my view of the world today. Heroism is more important to Buddhism than I previously realized. From my experience working with the monks at the Ch’an Meditation Center, I have become increasingly mindful of my surroundings and will strive to make a difference through my every action. After all, it is the small acts of courage that make a true hero.

When Sharon wrote this article, she was an eighth grader at William R. Satz School in Holmdel, New Jersey. Her many hobbies include piano, flute, tennis, painting, and writing. When she isn’t practicing Ch’an Buddhism, Sharon can be found daydreaming, contemplating the mysteries of the universe, or doodling in her journal.

Photograph of sky by Merrell Hatton.