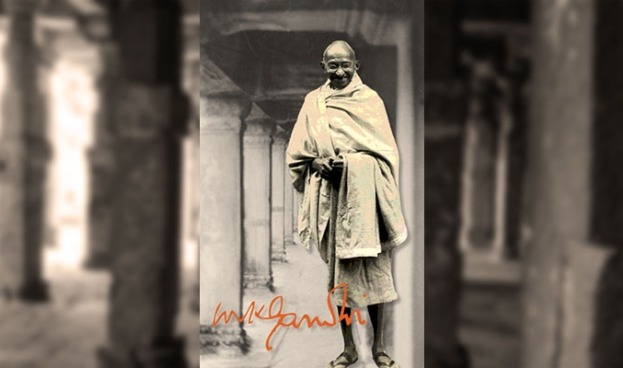 Gandhiji: The Father of My Nation

Posted by KidSpirit Online on October 3, 2016

by Prerna Chatterjee for KidSpirit’s Conflict and Peacemakers issue

"Love feels no burdens, thinks nothing of trouble, attempts what is above its strength, pleads no excuse of impossibility; for it thinks all things lawful for itself and all things possible."
– Thomas à Kempis

One fine evening during our stay at Madhya Pradesh, Daddy took me to a local fair. I was hardly five years old then. Fairs always excited me. Daddy bought tickets for a ride on the Ferris wheel. He also bought me some colored bangles from a shop. Then we both devoured candy floss. Suddenly at a distance I noticed a crowd of people. I dragged Daddy over. He scooped me up and had me sit on his shoulders. I saw a strange man amidst the crowd, draped in a simple cloth which clung to his waist. His head was clean shaven and he wore specs. He also carried a stick in his hand. People all around us clapped and cheered as he bowed. I wondered if he was a film star, but as far as I knew, film stars were drop dead gorgeous and this weird little fellow was anything but handsome. While walking back to our hotel, I asked Daddy who the man was.

"He was a freedom fighter. He fought for the country."

"Wow! So is he like Superman? Superman fights a lot, you know," I said.

Daddy laughed. "No silly. He’s not Superman. He’s braver than Superman and much wiser."

"Nobody can be braver than Superman," I argued.

"You’ll see when you grow up," Daddy said, smiling.

From that day, I was determined never to acknowledge the bravery of any person called Gandhi. Nobody could excel my Superman in terms of bravery and courage.

But within a few years I grew up. History was included in our list of subjects in school. I came to know about the history of my India, about the royal emperors and the ancient civilizations. Superman was soon replaced by none other than Mohandas Karamchand Gandhi.

India had been under British rule for about 200 years. In the beginning, British rule was considered to be divine, for Indians were mostly ignorant of their rights. Nationalism was yet to evolve as a developed concept. Moreover, since India was a country of diverse races, religions, and cultures, the Indians had varied opinions regarding British rule. It was in the nineteenth century that Indians became politically conscious. An organized political body, the Indian National Congress, representing the Indians, came into existence for the first time. Uprisings took place against the British government, petitions were sent to the authorities, and organized political movements began during this time. Small-scale terrorist activities against the British were also prevalent. However there were no mass movements in the country.

It was Gandhi who first organized mass movements throughout the country. These movements were unique. By "movement" we usually mean "rebellion." Gandhi’s movements were rebellions, no doubt, but they were without arms. He called this "passive resistance." Gandhi realized that violence would only bring devastation to the country and not lead to its ultimate goal of freedom. He launched the Non-Cooperation Movement in 1920. The Non-Cooperation Movement had two aspects, negative and positive. The negative aspect included abandoning of British institutions. Indians left schools sponsored by the British, the military, and police services. British goods were also boycotted. The positive aspect of the movement encouraged adoption of national goods. National education received a boost. This came as a shock to the British for they did not foresee this kind of agitation. They were puzzled and completely at a loss. However when the movement reached its climax, Gandhiji called for its withdrawal due to an unforeseen incident. On February 4th, 1922, an excited mob of agitators set fire in a police station in the small town of Chauri Chaura in Uttar Pradesh. Gandhiji immediately called off the movement. According to some scholars, this was a foolish decision on Gandhi’s part and questions were raised about his ability to lead the country. But Gandhiji was determined to carry on the freedom movement on non-violent terms. According to him, "An eye for an eye makes the whole world blind."

In 1930, Gandhiji began the Civil Disobedience movement. This movement affected the British economy badly. Due to the pressure of the All India National Congress, the British promised the Indians self-governance. In return they got Indian support in the World War. During this time, the British Government formed the Simon Commission, consisting solely of the members of the British Parliament in November 1927. This Commission was entrusted with the work of framing a constitution for India. Since there was no Indian representative in the Commission, it was completely rejected. A movement broke out in all parts of India against the hypocrisy of the British. The British were warned of a large scale Civil Disobedience Movement if India was not granted the status of a dominion. Needless to say, the British remained indifferent.

Gradually, the Indians lost both patience and faith in the British government. Gandhiji and other leaders of the Indian National Congress declared the Civil Disobedience Movement. On March 12th, Gandhiji made his historic march to Dandi from Sabarmati Ashram in Gujarat, followed by hundreds of his supporters. He reached Dandi, on the shores of the Arabian Sea on April 6th. There he broke the existing Salt Laws of the British Government by manufacturing a handful of salt on the sea shore. This is considered to be the beginning of the movement. A wave of nationalism swept the whole of India after this incident. People in different cities began breaking British laws. Picketing of shops selling foreign goods became a daily phenomenon. British clothes were burnt. Indians refused to pay taxes. Unable to cope with the situation, the British Government arrested Gandhiji and other prominent leaders of the movement.

There are certain words that I come across every time I read about Gandhiji. One of them is "Satyagraha," a Sanskrit word meaning "the force of truth." This was the main philosophy of Gandhi’s non-violent ideals. He urged the Indians to fight for truth.

The last movement launched by Gandhiji was in 1942. It was the Quit India Movement. This was Gandhiji’s last call for absolute independence. However within 24 hours of the announcement of the movement Gandhiji was imprisoned along with other prominent leaders. The movement did not die down even after Gandhiji’s arrest and was carried on by the people themselves.

There is a movie called "Gandhi," directed by Richard Attenborough. I remember a certain scene from the film. There were British police officials standing with lathis (wooden sticks) in their hands, obstructing a wide road. A rally of Indian protesters was approaching without arms of any kind. As they came near the police officials, they were smacked hard by the police. The protesters fell down, unconscious. None of them hit the police back. They just sacrificed themselves to the police. In this way the policemen knocked out about a hundred people until they could not hit anyone anymore. This determination of self sacrifice was instilled in the Indian minds by Gandhi.

Sometimes I search for the relevance of Gandhism in the present age of terrorism. I don’t know how successfully Gandhism can be implemented in today’s world. These things are beyond my ability to understand and pen down. But all I know is that nowhere in the world has there ever been a leader like Gandhi who through his life and actions has demonstrated the power of love which triumphs in the end. His greatness lies in the unique method he adopted for fighting wrongs. In doing so, has he not given us a substitute for warfare?

Gandhi was a believer in Hinduism. But he was tolerant of other religions as well. He realized that all religions with different rituals and methods of worship led to the same supreme force. Many of us feel that politicians are not to take religion seriously, for politics involves a more practical approach. But Gandhi attacked this view. He said, "To see the universal and all pervading Spirit of Truth face to face one must be able to love the meanest creation as oneself. And a man who aspires after that cannot afford to keep out of any field of life. That is why my devotion to Truth has drawn me into the field of politics; and all I can say without the slightest hesitation and yet in all humility, that those who say that religion has nothing to do with politics do not know what religion means!" For Gandhiji serving his countrymen was equivalent to serving God and it was this love for his own people that was reflected in his patriotism.

India attained her freedom on 15th August, 1947. She was reborn with her own government, her own policies, her own people. India has walked a long way since her independence. Times have changed and conditions have improved. Behind all these, there was a man, a man with a clean shaven head, a man who carried a stick in his hand. To this man patriotism was religion. This man spoke of love and truth. He is the father of my country. His name is Mohandas Karamchand Gandhi, the man who surpassed Superman in his bravery and determination.