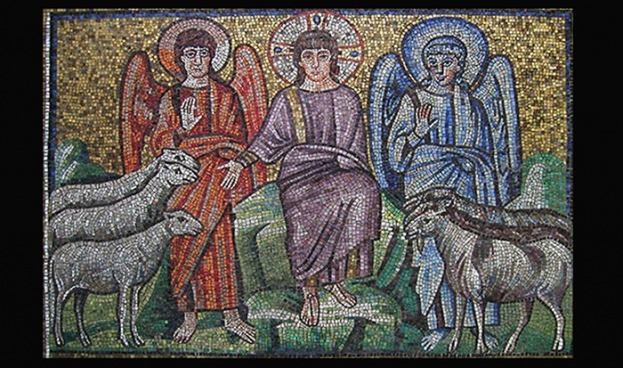 The Joy of Byzantine Catholicism

By Chris Woods in the KidSpirit Happiness Issue

Very few people even know of the beautiful tradition I grew up in, so here is its history: A few centuries after the founding of the Christian Church, two different traditions developed in the East and in the West. These traditions gradually grew further and further apart until they separated from each other completely around the 11th century. Though long foreseen, the split occurred when the West added to the Creed that the Spirit proceeded from the Father and the Son (added portion in italics) without consulting the East.

A few more centuries passed and some of the Eastern Christians decided it was time to return to Rome. So, a small group broke off from the East and asked Rome if they could return to communion, but keep their Eastern traditions. Rome agreed. Currently Roman and the Byzantine Catholics are in communion, so people from one church can receive Communion at the other church, but Byzantine Catholics are not under Rome. We have our own bishops (though when a post is empty, the Pope does choose the successor).

It was in this tradition that I was taught all the views of life and the world I still hold, including those on happiness, or rather, joy. For a happiness from pleasure could be sinful; there are many sins which give us some measure of momentary happiness. On the other hand, a happiness from hope, love, and life — that is, joy — will please God and last for all eternity, and so should be our main focus.

To be sure many religions aim to give their followers eternal joy. After all, is that not the yearning of the entire human race: that we may find rest and peace and joy after death? So it is with Byzantine Catholicism.

But now another question arises: what will this eternal joy be like? The answer is that it will be greater, deeper, and more profound than any happiness experienced on earth — more joyful than earthly joy, more sorrowful than earthly sorrow.

I am not saying that there will be sorrow in Heaven; that would be absurd. But the greatest cause of joy is sorrow. A prime example is the crucifixion and resurrection of Jesus Christ. When Christ died, the earth quaked and the sun hid itself; all creation mourned its maker. A Byzantine hymn says: “Sorrow now is all I feel.” And yet, precisely because of all this sorrow and, yes, despair, Pascha — or as most of the world knows it, Easter — is the greatest and most joyful feast on the calendar. Christ had returned beyond all hope of returning, emerged victorious beyond all hope of victory. The apostles, from their limited perception, did not understand his death, and thought it to be the end. So his resurrection filled them with such hope and joy that they were willing to die for him. And they did.

Although I have never experienced such overwhelming joy as the apostles must have on Pascha morning, I have known something similar, if not quite as pure. Some years ago my older brother and I grew interested in airsoft (realistic toy guns that shoot plastic pellets). We bought a couple of guns, a rifle and a pistol, and started playing in the backyard, with only protection for our eyes, not our whole face. On one Sunday afternoon, I took cover behind the shed and peered around the corner to take a shot. My brother was waiting for me, and pop! went his rifle. At once I felt a sudden emptiness in my mouth. Calling time-out, I explored it with my tongue, and found that half of one of my front teeth was completely missing. I went to the dentist the next day and had it fixed, but we didn’t play airsoft again for months. Indeed, I thought I’d never do it again.

On Christmas morning I found six presents under the tree with small notes on them in my older brother’s handwriting. They seemed to be riddles, and being rather quick at that sort of thing, I soon deduced that he had bought me a rifle of my own! Also, underneath the tree was a full face mask for each of us. I felt immensely grateful and happy, but if I hadn’t lost half a tooth, my emotions wouldn’t have been half as intense.

The source of happiness for both me, and the apostles, was the unexpected return of something lost but much loved. But, for the apostles there was something else as well. Christ had defeated the ancient enemy, death, and now they knew him to be undefeatable. During the service of Jerusalem Matins in particular, celebrated on the morning of Great and Holy Saturday — just before Pascha — I share in this aspect of the apostles’ joy. For in that service, the lamentations of the Mother of God, the Theotokos, for her son are woven in with shouts of triumph that Death has been defeated once and for all, that it will no longer trouble those who believe in the Holy Trinity for their salvation. And on Pascha itself, all sadness has left our hearts as we sing in triumphant joy of Christ’s victory over death itself, the ancient enemy of man.

In this confidence, and the knowledge that he was always with them, the Apostles went forth into the world not without fear but without regrets and second thoughts. There was nothing they would rather be doing then proclaiming the message: “Behold! The Kingdom of God is at hand!” And so it is. We Byzantine Catholics recognize this every Sunday morning when the priest starts the Divine Liturgy by saying: “Blessed is the Kingdom of the Father, and the Son, and the Holy Spirit, now and ever and forever.” And the people respond “Amen!” meaning, “So be it!”

If we accept this fact, that the Kingdom of God is present and with us this very moment, then we will truly be accepting God into our lives, and thus, happiness. “For in heaven, there is no sorrow, grief, nor mourning, but only life eternal.”

When he wrote this article, Chris Woods was a 15-year-old homeschooler in 10th grade in the south suburbs of Chicago. Writing is one of his favorite hobbies, and he is wonderfully happy to use this hobby to share his faith. Other hobbies include reading, listening to classical music and music from favorite movies and TV shows, Doctor Who, strategy games, and bike rides (usually to the library).