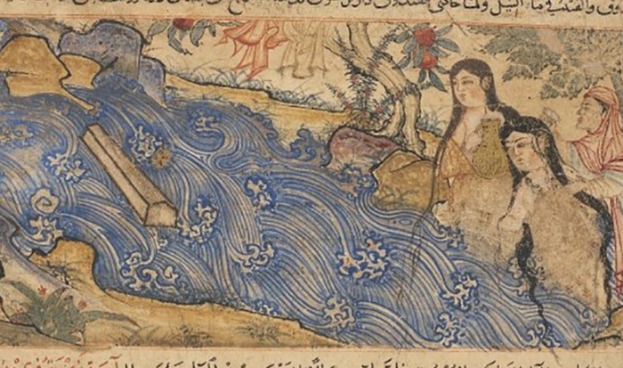 Basket on the River

Posted by KidSpirit Online on November 7, 2018

Almost as if it were part of the story itself, I can recall the day my mother told us the tale of Hazrat Musa like it happened just yesterday, instead of a decade ago.

It was a typical Lahori summer night, soundless except for the droning symphony of mosquitoes. My little brother and I tossed around restlessly in our beds, fanning our flushed faces. A power line near our home had been damaged, plunging our street into darkness, and the wind from the rechargeable fan our father had positioned near our bed made a feeble attempt at cutting through the thick-as-custard air. Hearing our muttered complaints and huffs of exasperation, our mother entered the room. She knew it was impossible for us to sleep in this heat, so she told us to be patient, and began telling us a story which transported us from the humid streets of Lahore to the searing dunes of ancient Egypt, where a child called Musa (Moses) was born.

At the time of Musa’s birth, Egypt was ruled by a terrible and tyrannical Pharaoh, whose power and influence stretched across the land and kept an iron-grip over the lives of his people. It was a time of oppression and suffering, with the tribe of Bani Israel (to which Musa belonged) shunted to the bottom of the social ladder as slaves. The Pharaoh was power-crazy and obsessed with his own authority. In ancient Egypt, Pharaohs were worshipped as gods, which made him even more powerful. However, he remained preoccupied with the fear of losing his influence.

Such was his insecurity that when he dreamt that his downfall would be caused by a son of Bani Israel, he commanded that all male children born in Egypt that year be killed, as this was the only way to prevent the prophecy from being fulfilled. All across the country, newborn boys were snatched from their mothers and ruthlessly murdered. Musa’s mother was pregnant with him at the time. She was horrified at the events surrounding her, and fearful for the fate of her unborn child, so she concealed her pregnancy from everyone except those closest to her. She was a pious woman, and she put all her faith in God to guide her and protect her child from harm.

Musa’s mother prayed to Allah to help their family. While pregnant, she had dreams that her son was destined to be the leader of his people and that she should cast him into the powerful, dangerous currents of the Nile River. Musa’s mother identified her dream as a divine one, and realized it was not a nightmare but a set of instructions from Allah. She was stunned and worried about the impossibility of it — if indeed her son was meant to live and become the leader of his people, how could the raging currents of the Nile lead him to anything other than his death? But she tried to brush her fears aside and grasp onto her faith.

When Musa was born, his parents were overcome with joy and yet their hearts trembled with fear. The Pharaoh had grown increasingly fanatic, enlisting guards for espionage and regularly checking every home in the kingdom. It was only a matter of time before they would return to Musa’s home and discover him.

Acting quickly, Musa’s mother used some reeds and straw to weave a waterproof basket for her son. She swaddled him in white muslin and placed him in his little cradle. She took him to the banks of the river and, with a heart torn with grief, lowered him into the turbulent water. To her surprise, the river became serene and smooth, gently propelling the basket and its quiet inhabitant to an unknown destiny. Musa’s sister was instructed to stealthily follow her basket-ensconced brother along his unusual journey.

One of the Nile’s tributaries flowed through the Pharaoh’s garden. Musa’s basket found its way there just as the Pharaoh’s wife, Asiya, was pruning some roses. Asiya, unlike her husband, was a kind and righteous woman. They were as unlikely a match as could be. Compared to his ruthless despotism, she had a gentle and sweet disposition. While her husband could order the massacre of an entire village and lose no sleep, she treated even the flowers in her garden with gentle and thoughtful care.

Asiya retrieved the curious basket and, to her surprise and wonderment, found a newborn boy inside staring at her with wide, curious eyes that did not weep as other children’s did. Even Musa’s mother didn’t know the whole truth; not only was her son a born leader, he was also unique, for Musa would grow up to become a Prophet of God. Asiya, although perturbed at his serenity, did not realize this either. An ordinary child would have cried out of thirst, hunger, cold, or simply the absence of his mother, but not Musa. Asiya instantly fell in love with the bundle in her arms. She and her husband had no children of their own, and she had always wanted one to nurture and love, so she beseeched the Pharaoh to let her keep him. After some resistance, the Pharaoh finally relented, and Hazrat Musa’s incredible life began as the adopted son of the tyrant whom he would grow up to defeat. An equally compelling and mystifying story, but one my mother said would have to wait for another sleepless summer night.

Noticing the absence of a conclusive “the end,” I implored my mother to complete her story. She promised that she would, but said that the life of Prophet Musa was so incredibly layered and eventful, it would be morning by the time she finished. I would later listen, astonished, as she described Musa’s growth into manhood as the great Pharaoh’s adopted son. I was on the edge of my seat when she reached the turning point of the story and his life, the call to prophethood: when Allah, manifesting himself as a mighty, burning tree, spoke to Musa and told him to deliver His message to the people. Soon after this call, Musa staged a coup against the Pharaoh, and in the course of one incredible day, the Pharaoh and his guards drowned in the currents of the Nile as they pursued Musa, and the story came full circle.

The stories of Hazrat Musa, along with others my family would tell me, have formed an integral part of my childhood and helped me to identify with my faith more deeply. I tried to explain this strange correlation to myself, and I imagine it is similar to how diagrams help to understand an otherwise complex concept. In Islam, stories are a vital means of communication of key beliefs; the Quran itself is filled with stories of numerous Prophets, so that Muslims around the world and throughout history can absorb and learn from their experiences.

This little story, the first installment of an entire series following the remarkable life of Prophet Musa, has stayed with me all these years because of the profound impact it made upon me. I had read countless stories about brave protagonists in extraordinary situations, and the plot arc of an ordinary person with an unordinary destiny was not unknown to me. But the story of Musa was the most inspiring. I wondered at the impossible, astonishing probability of it; that out of a million newborn children in Egypt, Musa alone was destined to become a Prophet of God and a leader of his oppressed tribe. And how he, by a miraculous twist of fate, ended up in the home of the very enemy he would later defeat. It made me believe in a lot of things: in my mother’s exceptional storytelling, the power of destiny, and above all, in miracles.

When she wrote this piece, Zainab Umar was a 17-year old student at the Lahore Grammar School in Pakistan. Her hobbies include writing, reading, art, and public speaking.