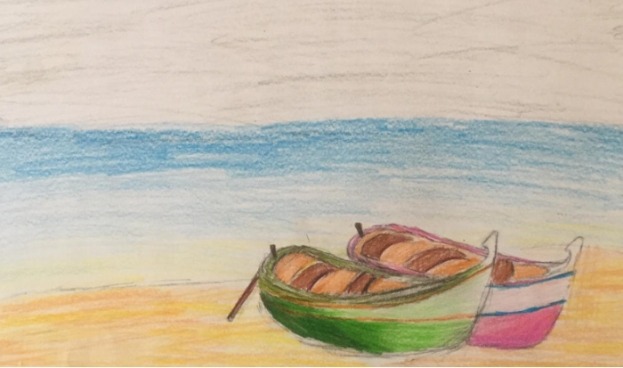 My name is Junyor Nicolás Florentín García. I am 17 years old, and I am from Coronel Oviedo, Paraguay.

Coronel Oviedo has become a big city and a nice place to live, but, similar to other cities in my country, it is still very traditional and religious. Most people are not open-minded at all, which is why almost everyone thinks that the new is bad and that it is better to stick with the usual routine and our comfort zones.

Why risk exploring or wanting to know the unknown? Why do the things that almost nobody does? Unlike many of those around me, I believe there is nothing better than having the desire for adventure, exploring what we do not know, and getting out of our element. Let me tell you, though, that I did not always have this point of view. I never thought that trying new things or getting out of the routine was a bad thing, but I was afraid to do it.

That fear disappeared when I realized that I am not alone. First of all, I have someone who has always been there for me, supporting me and encouraging me to move forward. That someone is my mother, who has never stopped believing in me. Everything that I am now, and everything I will be in the future, is and will be thanks to her. I have also met many other people throughout my life who have shown me that being afraid to do something for the first time is normal and that it is an opportunity to overcome your fears and grow as a person.

There have been many factors that have influenced my way of being and thinking, but I think the most important factor has been the people I know. I have learned countless things from those I have met. I have learned to appreciate everything I have already achieved, to never forget my origins, to not conform, to always look for the best in me and in others, to be more altruistic, to be more empathetic, to be better every day, but above all to never stop dreaming.

One influential community has been the Scouts, where my desire to explore the unknown and get out of my comfort zone has increased at the same time as my fear of doing so has diminished. As a Scout I have learned to be more independent, to form my character, to work with others as a team, to care about others, and to develop my leadership skills.

Then, in 2017 I became a catechist, and I began to teach children between seven and eight years old at the church of my neighborhood. As a catechist I have learned to increase and strengthen my faith, which also helps me to trust that I will be able to overcome all the problems or difficulties that I may experience. In addition, I have learned to become more understanding and patient, and how to better convey my ideas, skills that are fundamental when you work with children.

Last but not least, I have been influenced by two opportunities to meet people from different places. In 2016 I lived with a group of exchange students for about a year. All left something positive in my life, but those who did so the most were two friends who are like the older brothers that I would have liked to have. With them I shared an endless number of adventures, points of view, and many happy and sad moments as well. More recently, I participated in the Youth Ambassador Program. As a Youth Ambassador, I had the opportunity to travel to the United States, where I had training in leadership, youth entrepreneurship, the development of community projects, and diplomacy. It was a very enriching experience. The most important and significant element was not only the training, it was also the people I met throughout the process. Among them were my host mom, who gave me her love and affection and made me feel loved in the same way that my biological mother does; my host dad, whom I admire and hope to be like when I become a father; and my host brothers, who opened their hearts and made me feel part of their family.

I strongly believe that people have been such a strong influence on my way of thinking because through knowing others, we can also know and discover ourselves. All of my experiences make it clear that this desire for adventure, to explore the unknown and try new things, is the best that we can have. Although I do not deny that it will be difficult sometimes, perhaps everything that is worthwhile in life is.

When he wrote this piece, Junyor Florentín was 17 years old. He is from Coronel Oviedo, Paraguay, and his hobbies include drawing, jogging, cycling, hiking, and camping. Junyor is passionate about learning new languages and visiting new places to meet people and get to know their culture. His main goal is to acquire knowledge to positively influence his community.