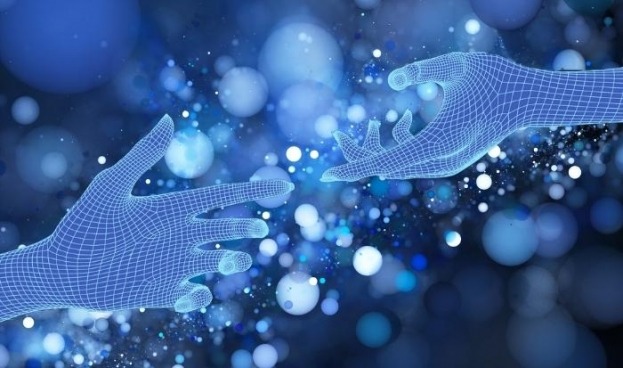 Posted by KidSpirit Online on August 1, 2022

At the very start of A Portrait of the Artist as a Young Man, James Joyce's fictional alter ego, Stephen Dedalus, reads through an index in the fold of his geography pamphlet.

The slowly expanding context in which he places himself gets to the very heart of what it means to be a human, and ergo, a global citizen: we are only as connected to one individual as we say we are. Truly connecting to someone means following worldly Dedalus in defining the geographic lines that distinguish us, in hopes of being able to appreciate how those lines gradually fade at a larger scale.

Stephen Dedalus is not a unique critical thinker capable of situating himself in a worldly context, nor would he list the Universe as his return address. He is quite typical in merely cataloging his home in expanding concentric circles. To understand connection and its limitations, we must first understand the nature of human differences. Connection is only difficult because of the human condition to catalog differences. With an awareness of the negligible differences between people, humans skew towards nepotistic tribalism: constructing structures along the lines of gender, nationality, language, political identity, etc.

While Dedalus uses geographic identifiers, any term we use to relate to each other necessarily scales from granular to global. These arbitrary constructs don’t just define and divide, they stratify. Every dominant group is inclined towards persecution as a form of self-preservation. The result of this is a philosophical departure from the global citizen ethos towards a more localized form of connection.

In reality, this era is the most primed for global connection in the history of humankind. With globalization has come an increasingly recognizable, corporatized, and homogenous culture. As Chinese, Spanish, and English become more dominant, language barriers crumble. And all of this has been hastened by technological advancements.

It has become almost cliché to say, but technology has led us to a more connected world. At my fingertips, I have the capability to connect not only to my immediate peers and family members, but to people from every corner of the Earth, stories from every era, and nearly every kernel of recorded human knowledge. The Library of Alexandria’s entire contents could fit onto a hard drive the size of my thumbnail. Even inside the echo chambers of our curated news and social media feeds, it is nearly impossible to ignore and remain apathetic about current events. Anyone who has Wi-Fi can not feign ignorance about the state of the world.

So if we have the means to understand others, what’s standing in the way of connection?

In his book The Life You Can Save, philosopher Peter Singer poses an all-encompassing theory of human connectedness. Starting from the axiomatic assumption that human suffering is inherently bad and that, given the opportunity, most of us would minimize that suffering, he questions why we don’t. This, he claims, isn’t an indication of naivety but self-inflicted obfuscation of tragedy. We avert our eyes from the sickly child on the news because it in some way implicates us if we are aware of suffering and do not act.

He renders this philosophy in a thought experiment: say you are leaving a fancy gala in an expensive tuxedo and you walk past a child drowning in a lake. He postulates that almost anyone would not hesitate to jump in the pond anyway, ruining their clothes and bearing a financial burden to clean or replace them. Yet why do we not send the money we would spend on dry-cleaning (or five percent of our incomes) to aid organizations? That alone would directly save multiple children from death and suffering.

The obligation we have towards other humans, including those outside our immediate circles, is what the ancient Greek philosopher Diogenes of Sinope would call “cosmopolitanism”. Analogously to Stephen Dedalus viewing the widest definition of where he lives as the “The Universe,” cosmopolitan translated literally from the Greek is a citizen (πολίτης) of the universe (κόσμος). Although in antiquity there was not yet the conception of the modern nation-state, we each in some way or another are already connected to each other given the lowest common denominator of living on this planet.

It’s our bias toward helping those within our more immediate circles of connection and our hope to receive praise that stand in the way of true connection. Helping others, exclusively locally and for self-serving measures, makes a positive impact on the world but creates a false sense of community and connection. A perfect case study of this is in the “performative activist,” whose posts, donations, and marching may tangibly support a cause but whose motives are ego-driven. Again, while it may yield net positive support for a movement, because the activism is not in good faith authentic connection is not able to form between benefactor and recipient. Ungenuine charity that exists only between those who are alike does not create or strengthen bonds but insulates participants away from the rest of the world. For the Greek thinkers, connecting means contracting our circles of connection, realizing that everyone is kin; for Singer, it means broadening our circles to include more and more people.

Just as any good philosophy (including that of Singer and Diogenes) should maintain relevance spanning different ages, our outlook on connection should be able to span and survive disparate historical and cultural contexts. For the two thinkers, the world they were writing in and that formed their positions has only grown more connected. It is an inevitable caveat that each thinker's work can no longer fully speak to modern conditions: the levels of polarization through mass connectedness. Even still, the form of connection they are speaking to isn’t situational but speaks to universal truths about human nature. The form of connection they are proposing isn’t reliant on human categorization. This form of connection exceeds the realm of political ideology and personal preference.

Finding true connection comes from applying those principles to our individual interactions, and acting on the compassion we owe each other. Truly connecting isn’t just applying generosity globally; we must dissolve the membrane between the self and the collective. To truly connect is to help a friend move, share a good joke, or listen deeply, and to extend that geniality to strangers as well. By collapsing the rigid definitions of who and what we are, we grow closer to those who share those definitions. To truly connect we must approach interactions with friends and strangers alike.

Oscar Luckett was a 12th grader at Saint Ann’s School in Brooklyn, New York, when this piece was published. He enjoys playing the piano, solving crosswords, and fencing.