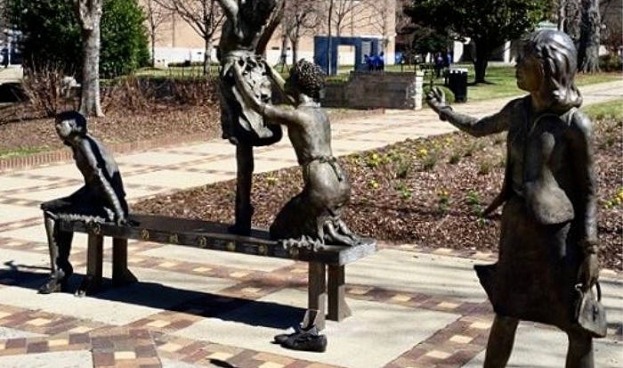 "When Will Our Needs and Hopes Matter?"

"Democracy is more than a system of government; it is a way of life. We can assess the vitality of a democracy by how well it is serving the people's needs and hopes."

These opening lines from the Practicing Democracy Blog speak to a way of being which — more often than not — seems to allude some people's grasp. What does "practicing democracy" mean when the very systems one is to consider disregards your humanness and have done so since the inception of this nation?

This question was nudging me while on my walk in Kelly Ingram Park in Birmingham, Alabama. It whispered in my ears as I said a prayer at the 16th Street Baptist Church marker for Addie Mae Collins, Denise MacNair, Carole Robertson, and Cynthia Wesley: the four little girls whose young lives were too soon taken by a Ku Klux Klansmen's bomb on September 15, 1963.

Birmingham was the first stop for this summer’s interfaith anti-racism cohort: a group of twenty-people of faith, diverse in race, ethnicity, gender, age, sexual identity, and marital status. Traveling from various parts of this nation, we set to gather in Birmingham in early summer to begin our Pilgrimage to explore American historical sites of Black terror and trauma. Some of our aims while visiting these sites:

1) to explore the intersections of white supremacy, justice, and faith

3) to consider how our experience informs and deepens our anti-racism and faith work, as well as — if possible — narrow our various divides.

Each visit began with a self-assessment adapted from the Punctuation Exercise for our purpose. This tool not only assisted our cohort to better understand our own psychological, emotional, intellectual, and spiritual selves prior to encountering one of these historical sites of Black terror and trauma, but also served as an immediate way to capture our responses after a site visit.

The visit at Kelly Ingram Park and 16th Street Baptist Church — recalling the racial strife in Birmingham, Alabama in 1963 — troubles the narrative of the "common good." It is one thing to read about Bombingham (please see "Remembering Birmingham's 'Dynamite Hill' Neighborhood" for more context), George Wallace, and the notorious Eugene "Bull" Connor. It is another to sit in the very space where years of white hate and violence disrupted the morning on September 15, 1963. The explosion was felt across the nation, pointedly destroying the notion of Black parents everywhere who held that in a sacred place, a church, their children would be safe. The great Black Poet Dudley Randall recalls this shatter in Ballad of Birmingham:

"Mother dear, may I go downtown
Instead of out to play,
And march the streets of Birmingham
In a Freedom March today? . . .

"No, baby, no, you may not go,
For I fear those guns will fire.
But you may go to church instead
And sing in the children’s choir. . .

"For when she heard the explosion,
Her eyes grew wet and wild.
She raced through the streets of Birmingham
Calling for her child.

"She clawed through bits of glass and brick,
Then lifted out a shoe.
'O, here’s the shoe my baby wore,
But, baby, where are you?' " 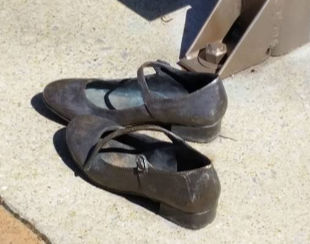 When we stood at the marker for the girls on the side of 16th Street Baptist Church, looking at the little girl’s memorial shoes in Kelly Ingram Park, Randall’s words were palpable.

As our cohort sat together to hear and learn from one another, our conversation turned to discuss democracy as described in this blog's first post: "It is a way of life-based upon citizens' commitment to the common good. We can assess the vitality of any democracy by looking at its history, its current state, and its potential to serve the hopes and dreams of its people. But the truest measure of its health is how well it is practiced." Using our site visit as our lens, we began to interrogate the idea of democracy as more than the system of government.

The conversation was rich. Fraught with challenges and pain, one of our members from the Midwest said, "How can I look or even find the 'common good,' when the news of the day consistently reminds me of the numerous ways society fails to see the good in my African American sisters and brothers? Like Botham Jean, who was 27, unarmed, and sitting on the sofa eating ice cream, when he was gunned down in his flat in Dallas?"

And just like that the past — Addie Mae Collins, Denise MacNair, Carole Robertson, and Cynthia Wesley — met us in our present through Botham Jean. The silence following our members' question began to break as the naming of various Brown and Black folks capturing news headlines began. "The unknown immigrant father and his daughter," said a member from New York. "Trayvon Martin," spoke the most senior of our group … and on and on and on. Another interjected, "Yeah, Rev., when will our needs and hopes matter?"

Our evening ended with more questions than answers. Because of our collective commitment to become anti-racist, the undoing we all felt was okay. As persons of faith, we turned to various spiritual practices to reflect on this place of unease. As the facilitator of the pilgrimage, I recognized that it is in this very place of unease where hope resides, and my task is to continue to guide us there.

To get to a democracy that realizes and values all its people — even those not considered at its inception — requires more than being in proximity to difference. It takes real work, honest and difficult conversations, truth-telling, and learning to be okay with waiting on answers. Or, as we say in my community of faith, "It’ll get better in the by and by."

Our cohort left Birmingham the next day, heading to the Edmund Pettus Bridge in Selma, Alabama. As we gathered to depart, we took a moment to #SayHerName and called aloud, "Addie Mae Collins, Denise MacNair, Carole Robertson, and Cynthia Wesley." We closed our ritual with the collective acknowledgment that although we are leaving Birmingham, we will carry the girls with us.

As we took our seat on the bus, one member preparing to sit behind me said, “Rev. it’s like this — I started the [pilgrimage] as a question mark, and I continue as a comma. And hopefully another and another and another." Hope is in the commas.

Editors' note: This post is the first in a series of three by Ada Renée Williams about 2019 pilgrimages she led to civil-rights sites.