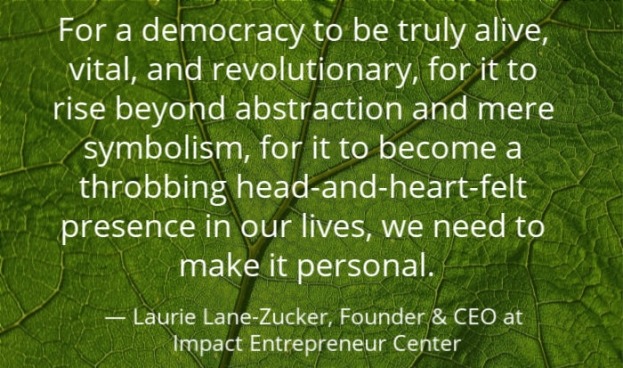 On November 19, 2019, students, staff, and faculty from the Graduate Theological Union and wider Berkeley, California, community came together for a workshop on democracy. Through rituals and conversation, we considered this question: "Can spiritual practice strengthen democracy?"

After introducing ourselves and what brought us to this conversation, Aizaiah Yong and I, both fellows with the Practicing Democracy Project, provided an overview of its resources . We then did two rituals: the Citizenship Vow Ritual and the Voting Ritual. We then opened up for wider conversation, considering whether, in our own experiences, spiritual practice and religion have strengthened our experience of democracy and democratic values. If not, why not? If so, how? Could we imagine a situation where this could be possible?

This was our agenda:

12:45 p.m. – Introductions: name, affiliation to GTU/community, what brings you to this conversation today?

12:50 p.m. – Provide overview of the Practicing Democracy Project and the Spirituality & Practice website (up on the touchscreen), looking at a variety of types of resources, showing 37 practices in the Alphabet of Spiritual Literacy, particularly emphasizing what each of us as workshop facilitators had worked on in our Practicing Democracy fellowships.

1:15 p.m. – Engage in the Voting Day Ritual followed by personal reflection time (participants could write thoughts that arose related to each finger) and large group sharing.

1:25 p.m. - Open discussion on this prompt: "In your experience, has religion or spiritual practice supported democracy and democratic values? If not, do you think it could? How so or how not?"

It was interesting to share these rituals and conversation prompts in such a diverse community, particularly with students of a variety of nationalities and religious affiliations present: Muslims, Jews, Christians from a variety of denominations, a secular person studying Buddhism, an Ifá practitioner, a yoga practitioner, and a few who didn't identify their traditions.

For me, it was interesting as I prepared for this workshop to consider the intersection of religion and democracy in my own life, as this was not something I had thought much about before on a personal level. However, it did occur to me that I had one of my first experiences of democracy in my religious community.

In my mainline Protestant church, I participated in confirmation class when I was 12 years old. Toward the end, I was very surprised to learn that once we went through confirmation, we would be considered full adult members of the church, able to vote at congregational meetings and serve in leadership, such as on the church board. Although I had participated in student government, this was the first time that I was able to participate in adult democratic processes and really have my voice and my perspective be equivalent to that of an adult. It was very moving, and I took this responsibility seriously.

Others' experiences varied greatly. Some shared about how in their context certain religions are favored by the government and it can be dangerous to show one’s religious affiliation, especially during election times. Others talked about how politicians come to their religious communities during elections trying to drum up votes but are noticeably absent the rest of the time. Many shared about the similarities between religion and democracy — both have rituals and seasons, require time and attention, and involve an element of belief and commitment.

It was interesting to hear so many varied stories, and we could have gone on at length to continue the sharing from our own contexts and experiences. Toward the end of the conversation the issue of capitalism came up, noting the interplay of other systems that operate in addition to religion and politics. The question was posed of whether capitalism and democracy were compatible — and opinions were highly varied. But people listened respectfully and remained in the room. Each voice mattered, and that is certainly a part of democracy in action.