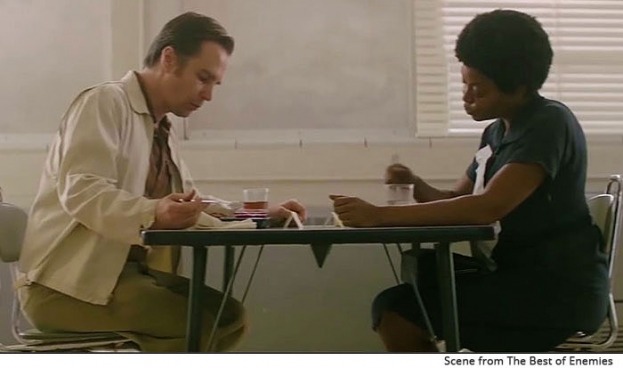 Will D. Campbell, a progressive Baptist preacher, marched with Martin Luther King, Jr., in Birmingham and Selma, and served as a race relations troubleshooter for the National Council of Churches. Yet he was known as the "chaplain of the Ku Klux Klan." (For more about his remarkable life and his reconciliation work, see our Naming the Days feature for his birthday.)

How could a committed civil rights activist befriend white supremacists, when they were openly persecuting, even killing, blacks? Campbell put it simply, "If you're gonna love one, you've got to love them all." And he believed that God loves everybody too.

This willingness to love the enemy is foundational to reaching across racial and political divides. It is illustrated by two movies, both based on real-life stories of Klansmen befriended by black leaders.

Burden, opening in theaters in March 2020, is the story of Rev. David Kennedy, a civil rights leader in a small South Carolina town. When in 1996 the local leader of the Ku Klux Klan opens a museum celebrating the KKK's history and accomplishments, Kennedy encourages his congregation to protest — but he insists they remain nonviolent and act in the spirit of love, not hate. He even invites a white man, Mike Burden, who has left the Klan to live in his home. He is able to have compassion for Burden, recognizing that the man is suffering too.

The Best of Enemies is the story of the unlikely friendship between an African-American community activist, Ann Atwater, and the president of the local chapter of the Ku Klux Klan, C. P. Ellis. The schools in their town, Durham, North Carolina, are still segregated in 1971, and when a black elementary school is destroyed by a fire, the community has to decide whether to let the black students go to the white school. A judge brings in an organizer to facilitate a "charette," a nonviolence conflict-resolution process that involves community-wide meetings to discuss issues. Ann and C.P are made the co-chairs. The experience transforms them both — not because of their discussions but because they begin to see each other as human beings with gifts and challenges.

Do you think you could befriend a white supremacist? Do you believe that a white supremacist can relate to those they consider to be inferior and a threat? How do people learn to love their enemies? Will Campbell started with love. David Kennedy started with hospitality, moved on to compassion, and then was not only able to forgive, but he encouraged Burden to ask for forgiveness. And Ann Atwater and C. P. Ellis began with empathy and moved on to kindness.

This is how spiritual practices help us reach across divides.