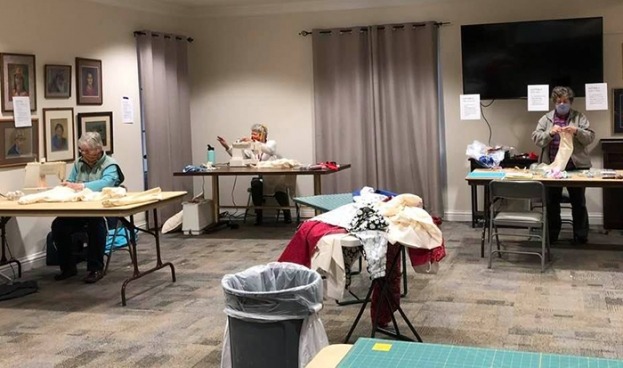 In rural America during the 18th and 19th century, it was common for a community to come together to build a barn. Every farmer needed a barn, but it was impossible for one family to put one up themselves. So their neighbors joined in, knowing full well that should they ever need to build or replace a barn, they would get help in return.

Barns are not the only acute need that have been addressed by community efforts throughout history, both in the United States and elsewhere. We see the barn raising lineage alive and well during the coronavirus pandemic.

The intentional community where we live, Pilgrim Place in Claremont, California, is a CCRC (continuing care retirement community) with independent living houses, assisted living apartments, and a skilled nursing center. In early March, the administration noted that there was a need for more PPE (personal protective equipment) for the staff and medical professionals working throughout the campus, given the likelihood of shortages.

Pilgrim Place residents responded with their own version of a barn raising. They began by making two fabric masks for every member of the staff as well as some of the assisted living and health center residents. Next they set about sewing 100 gowns.

The community has an annual festival with a "Fabrications" booth that sells handmade items as well as donated fabrics. That supply, along with other material retrieved from residents' closets, was turned over to a team of sewers who converted a conference room into a gown-making center with everybody wearing masks and stations at the proper social distance. One resident made patterns. Others cut fabric, sewed gowns, threaded elastic in the sleeves, and ironed the finished products. Twenty-nine residents completed 100 gowns in 10 days, cheered on by other members of the community. On the day the gowns were presented to the medical personnel, they held a parade! (see video below).

As we applauded this example of barn raising, we began to notice other examples of this lineage happening all over the country. Volunteers have been delivering food and household supplies to elders, those with compromised immune systems, people with disabilities, and others. Food banks have set up curbside distribution systems, so those with cars can safely get supplies. In some apartment buildings, residents have made little "at home" displays with essential supplies for others to take as needed and replenish when they can.

Medical professionals have responded in extraordinary ways to the needs not only in their own communities but across the nation. Thousands of nurses came from as far away as California and Texas to help in New York City hospitals. Doctors without Borders, which has served in conflict zones like Syria and Afghanistan and during the Ebola outbreak in Africa, rushed a team to the Navaho Nation in the Southwest.

We can imagine that during those rural barn raisings that children were watching and cheering on their neighbors, encouraging those doing the hard labor. So it has been during the COVID crisis. On the sidewalks at the perimeter of Pilgrim Place, chalk writings and drawings have appeared. One with a big arrow pointing to one of the independent living houses said, "Nice people live here." Elsewhere, school children have sent good well cards to patients and thank you cards to first responders.

Barn raising is a way to practice democracy. Just look at our chart of Democratic Values, Visions, and Spiritual Practices and you'll see why. These community responses to acute needs uphold the common good and the idea that "out of many — one." They cultivate the virtues of caring, commitment, empathy, generosity, service, thankfulness, courage, sacrifice, cooperation, mercy, dignity, perseverance, resilience, idealism, and responsibility. They illustrate the spiritual practices of compassion, hope, hospitality, kindness, connections, love, reverence, vision, meaning, and more. Those in the barn raising lineage are good neighbors and good citizens.