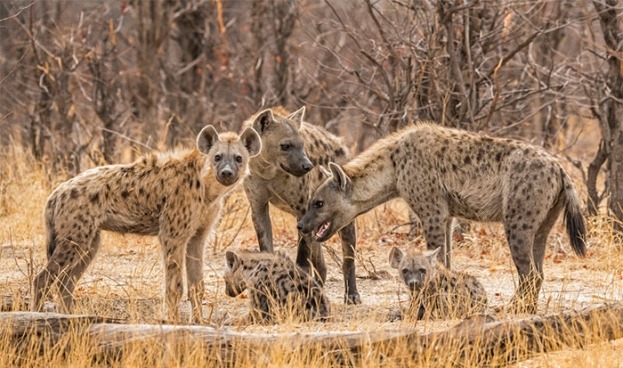 Sneezing Our Way to Agreement

Posted by Patricia Campbell Carlson on May 25, 2020

To be clear from the outset, I am not advocating sneezing in the vicinity of others during the current pandemic or at any other time. But did you know that a recent study suggests that hyenas use sneezing to decide when their pack is ready to hunt?

After a rest period, a few sneezes from dominant pack members can set a group of hyenas on its way. Lower-ranking hyenas must sneeze as many as ten times to get across their point that they're hungry and to convince others that a meal is in order. But even with this inequality, hyenas have a form of community decision making.

You can learn about this and other forms of creaturely democracy in "How Animals Vote to Make Group Decisions" from The Conversation, a not-for-profit global network of newsrooms. Maybe neither hyenas nor sneezing appeal to your finer senses. Maybe you've been traumatized by seeing wild dogs scheming against, say, a lion cub in a Disney movie. Well then, how about honeybee scouts?

When a hive becomes overcrowded, several of these scouts go out independent of each other to find what they consider an ideal new habitat or habitats. They then return to the current nest and dance to communicate the essential news about their chosen site. Each scout does its own dance, but after a while some pick up another's dance, until more and more dance about one location. When all the scouts agree about the choreography that points to a single place, the hive gets ready to move there.

And if you're not fond of bees (yes, they're vital pollinators and make honey, yet they do sting), how about meerkats? When a meerkat wants to move to a new patch of ground, it lets out a "moving call." At least three meerkats need to give the same call before the gang will follow that lead.

We humans are not alone in this universe of democracy. Coming to a group consensus in a reasonably fair way allows other species to stick together, survive, and thrive, too. The question for humans now is: Can we be as wise as hyenas, bees, and meerkats? Please sneeze (at an acceptable social distance, and into a tissue), if you agree that we can.