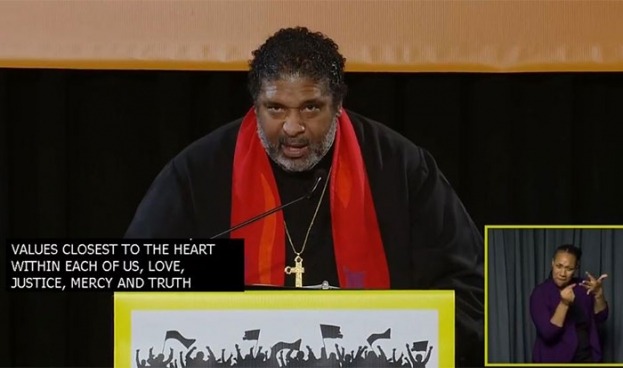 Reallocating Resources in a Democracy

A democracy is supposed to reflect the will of the people. When people vote, speak out at community meetings, or protest, they are responding not only to particular politicians and parties but to the policies they represent and the ones people want instituted. Life in a democracy is about more than love of country and appreciation of the services we receive from the government. It's about deciding how to allocate resources — where the money and other support goes and who benefits from it.

I got to thinking about allocation of resources as I watched the virtual Mass Poor People's Assembly and Moral March on Washington on June 20, 2020. Speakers streamed in from across the country demanded a moral revolution for our time. Those most directly impacted by poverty were given most of the time in the nearly three-hour program to tell their stories and make their demands.

The Moral March was wrapped up by a rousing speech by co-chair William J. Barber II. In his speech, Barber clearly established that this campaign wants to change the moral trajectory of the country, and it is also, and most importantly, rooted in calls for visible and sustainable change for the people.

He laid out in plain language just how the demands of the Poor People's Campaign can be met. It's about reconstructing everything with policies that support life, liberation, and love. It's about reallocating resources.

At the end of the March, I found myself reflecting on the specific items that Barber lists in his speech. I copied them down. As you review them, think about how you want the country's resources allocated. And what can you do to change the way they are.

You can visit the Poor People's Campaign website to learn more about what their mission, goals, how they envision their demands playing out, and ways to get involved locally here. You can watch the full live stream of the March (which I highly recommend), or skip to 2:54:14 for Barber's concluding speech.