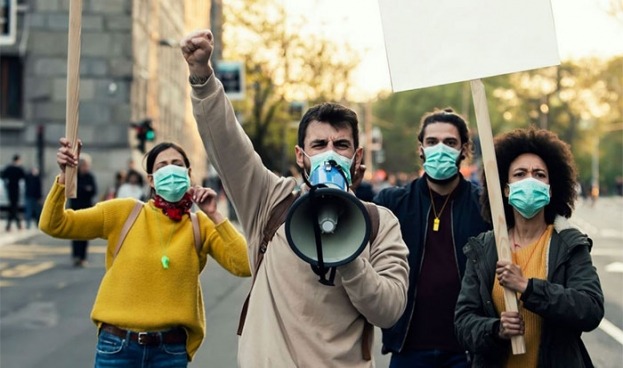 "People have the right to protest — that’s what democracy is all about."
— Condoleezza Rice, former U.S. Secretary of State

Protests have always been part of movements for justice in the United States. The First Amendment to the Constitution guarantees citizens' rights to make their opinions known: "Congress shall make no law respecting an establishment of religion, or prohibiting the free exercise thereof; or abridging the freedom of speech, or of the press; or the right of the people peaceably to assemble, and to petition the government for a redress of grievances."

I am struck by how fitting it is that the protests sparked by the killing of George Floyd by Minneapolis police officers are taking place during Pride Month. In June of 1969 the Stonewall Riots broke out in Manhattan. They started as a result of continued violence, brutality, and outright discrimination against the queer community at the hands of police officers. These protests sparked the movement for LGBTQIA+ rights across the country; they were led by black and brown folks like Marsha P. Johnson who were fed up with the violence against their communities and took to the streets to demand justice.

As in 1969, today we as a nation are faced with the reality that not all people are treated equally. That black people around the country are disproportionately targets of police violence. That men and women like Eric Garner, Mike Brown, Botham Jean, Breonna Taylor, George Floyd, and so, so many more are killed each year by the police, often for little more than being black in America.

As a queer white woman, I am not the voice that needs to be heard during this time. So, rather than filling this post with my own reflections, I want to take this space to share some resources to help educate, to identify some places where you can show your support for black lives and the ongoing work of organizers, and to lift up the voices of those doing the work.

How to Start Getting Educated:

What to Read/Watch
Between the World and Me by Ta-Nehisi Coates (plus We the People Book Club Guide)
The Cross and the Lynching Tree by James Cone
Hope on a Tightrope: Words and Wisdom by Cornel West
13th, documentary directed by Ava DuVernay
For more book and film recommendations and other resources, see S&P's topic on racism.

How to Start Taking Action

DONATE! If you can’t protest, or don’t feel comfortable doing so in the midst of the pandemic, find organizations that can use your money to work for change. Here are a few:

The George Floyd Memorial Fund (gofundme.com/f/georgefloyd)
Minnesota Freedom Fund (or search for an organization doing this work in your own community)
Campaign Zero
Black Visions Collective

PROTEST! Join black organizers and people of all colors across the country as they take to the streets to protest continued brutality toward their communities. Groups like Black Lives Matter are working tirelessly to organize peaceful protests, while keeping in mind the difficult overlay of a global pandemic.

Protesting isn’t for everyone, but if you feel called to participate, stay safe and listen to protest leaders about maintaining the peace. To prepare, know your rights. Here is helpful information from the American Civil Liberties Union.