A Prayer for the Children of Gaza 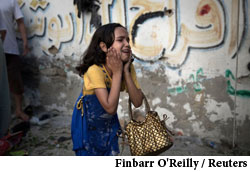 Guardian of the Grieving, be with the besieged children of Gaza as they try to weather the storm of bombs hitting their small walled-in community. Attend to each child with your embrace of compassion and soften the blows of their pain and sorrow.

FACT: Of the 1.8 million people in Gaza, 900,000 of them are under the age of 18. During Israel's current assault by land and air on this small strip of land, some 200,000 Gazans, the majority of them children, have had to flee their homes and have sought shelter in UN schools and other public places. The children here under 10 years old cannot remember a world without Israel's seven-year blockage of Gaza. They are living through their third war. (The dailybeast.com reported by Jesse Rosenfeld)

"Sun of Justice, . . .
Sear our minds with the painful reality
of those who need your protective strength.
Radiate our hearts with true concern for them.
Burn away the dross of empty indifference.
Energize us into taking deliberate action
To aid those suffering from the power of others."
- Latin Hymn in Fragments of Your Ancient Name

Next Post: A Prayer for Those Who Are Grieving for the Passengers on Malaysia Airlines Flight 17