A Prayer for Malala Yousafzai and Pakistani Girls 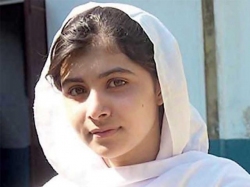 On Tuesday, October 9, 2012, Malala Yousafzai, a 14-year-old schoolgirl in Pakistan, was shot in the head by Taliban militants in the Swat Valley, who claimed she had become a "symbol of Western culture in the area." She is, in truth, an activist for girls' education in Pakistan. At age 11 she began writing a blog about life under Taliban rule, chronicling the suffering when they closed girls' schools.

There have been widespread protests throughout Pakistan against the shooting, which took place on a school bus. Two others girls were also injured. Malala remains in critical condition; she has been moved to the Armed Forces Institute of Cardiology critical care unit in Rawalpindi

Ya Rahman,
O Most Compassionate One,
Ya Raheem,
O Most Merciful One,

Be with our sister Malala and her schoolmates
as they are treated for their injuries.
Make them aware of your sustaining grace.
Strengthen their families, friends, and caregivers
as they offer them support and nurturing.

Ya Rahman, Ya Raheem,
Be with all the people of Pakistan who
stand in solidarity with their champion of
school education for girls and the
opportunity for all to live free lives.
Give them courage to speak out against
repression of all kinds.

Ya Rahman, Ya Raheem,
Be with the perpetrators of this terrible crime.
Open and transform their hearts
to conform to your will for all your people.

Light a candle for Malala at our sister site Gratefulness.org.