A Good Guy with a Gun?

Posted by Frederic and Mary Ann Brussat on December 26, 2012

A week after the shootings at Sandy Hook Elementary School in Newtown, Connecticut, the National Rifle Association announced its solution to stemming the tide of school shootings. "The only thing that stops a bad guy with a gun is a good guy with a gun," said Wayne LaPierre, the vice-president of N.R.A. at a news conference reported in an article for the New York Times. The organization wants to arm security guards at every school in the country and blamed violent video games, the news media, and law enforcement for all the mass murders that have happened in the U.S. Since 23,000 schools already have armed guards, the N.R.A. said it would help develop a plan to carry out a national program involving the rest of the nation's 99,000 schools. 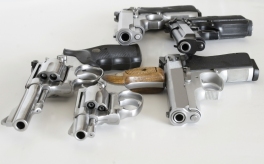 It is clear to us that the wealthy and powerful National Rifle Association has no intention of working with the President and Congress on any new gun control measures. Their solution is to protect children with more guns! This pro-gun approach will probably appeal to those who support the N.R.A.'s erasure of restrictions on carrying concealed weapons and President Obama's signing into law a bill allowing guns in the national parks.

Violence has become as American as apple pie. The U.S. leads the world in executions; we are plagued by gun-induced rampage shootings; we are seeing more and more fatal injuries in contact sports; we are caught up in the national phenomenon of bullying; we are using drones to kill our enemies from a distance; and two of the most critically acclaimed movies — Zero Dark Thirty and Django Unchained — focus so much on violence that they have the effect of watering any seeds of violence we carry inside us. In this scary and troubling milieu, it is only natural that the National Rifle Association's proposal would be seen by many citizens as a common-sense solution in the war against those who are killing our children. After all, it's "us" against "them" and the one with the most firepower will win. Our response: Lord, have mercy.