The Nones Are Off the Bus 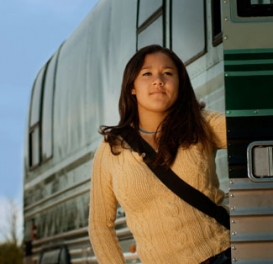 In a post at TheInterfaithObserver.org, Anne Benvenuti writes about the "Nones," the largest and fastest growing segment of the population in the religious landscape of America, according to the most recent survey from the Pew Research Center; they are now 20% of the population and are disproportionately young. They are people who don't have any religious affiliation and are not amenable to labels. Benvenuti compares this band of seekers to those who get off the tour bus because they would rather discover a place as it really is. We suspect they've grown tired of taking the same routes and hearing the same explanations from the guides sanctioned by the religions. Instead, they value experience and variety. Interestingly, Benvenuti notes that many of the Nones are really Alls.

We have read critics of Nones who assume that their sampling of the beliefs and practices of the various religions is nothing more than eating a few hors d'oeuvres at a banquet; it can't be satisfying and should not be encouraged or condoned. We think that this criticism does not really take into account the genuine searching spirit of Nones and only serves to alienate them from working together with those who are religiously affiliated to develop fresh expressions of spirituality for the 21st century.

We agree with Benvenuti that a global spirituality is slowly coming into focus as more open-minded and open-hearted souls are redefining and reframing faith, devotion, practice, justice, reverence, and connections. We are monitoring these off-the-bus explorations of Spirit and are curating our content at Spirituality & Practice to add resources about them to our "Religions and Spiritual Paths" section. And in September 2013, we will offer an e-course by Rabbi Rami Shapiro designed with them in mind. In his typically creative and hospitable style, he doesn't call them "Nones" or "spiritual but not religious." He calls them "spiritually independent."