The Joy of Old Age 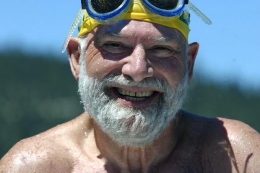 "At 80, one can take in the long view and have a vivid, lived sense of history not possible at an earlier age," writes Oliver Sacks, professor of neurology at the N.Y.U. School of Medicine and the author of Hallucinations. He is thankful for having the time and energy in his life to write 12 books. Just to balance things off, he admits that he is sorry "to be as agonizingly shy at 80 as I was at 20" and that he has not traveled as much as he should have.

Sacks thought he was a goner when at age 41 he had a bad fall and broke his leg while mountaineering alone. Fearing death, he reviewed his life and realized that there were so many things to be grateful for. Now, so many years later, nearly a third of his contemporaries are dead but Sacks hopes he can die in harness, as Francis Crick did. While he is cognizant of the specter of dementia or stroke, he feels not "a shrinking but an enlargement of mental life and perspective." Best of all, Sacks looks forward with joy to being 80 and "free to explore whatever I wish."

We have covered reports on aging and predictions about what could happen to the Baby Boomers in this blog. It's important to pay attention to what is happening in our changing world. But equally important for a spiritually literate perspective on life is to be able to recognize such spiritual qualities as gratitude and joy in the people and events we encounter. Oliver Sacks is a good exemplar of both of them.