Here in the U.S., we hear a lot of complaints about medical care, especially for poor people. Even with the option of "Obamacare," many people are not well insured and are relying on emergency rooms. Elsewhere in the world, especially in war zones, health services are few and far between.


This is a spiritual as well as a medical emergency. That's why we sit up in admiration when we come across moral mentors such as the doctors in two documentaries. 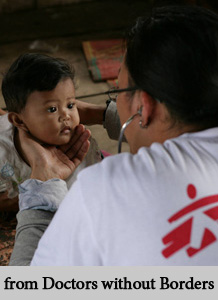 In the bold and thought-provoking documentary Code Black, we meet a dedicated group of young emergency room doctors who give us hope for the future with their commitment, talent, and compassion. Every one of them believes passionately in "mercy medicine" as an alternative to treating only paying patients. They serve the poor and do everything they can give them the medical help they need.


Another documentary about idealistic physicians is Living in Emergency: True Stories of Doctors Without Borders. Four doctors in the Congo and Liberia work around the clock as they practice "mercy medicine" on an unending stream of patients. We are told in the documentary that over two billion people in the world have no access to medical care at all. These stressed-out doctors struggle to stem the tide of disease and pain that are the after-effects of war. It is understandable that they self-medicate with alcohol, given the nonstop agony they confront every day, not to mention muck-ups and failures that come when they do not have the proper medicines, tools, or supplies they need. Seeing them doing the best they can in hellish circumstances makes them more human and heroic than ever!