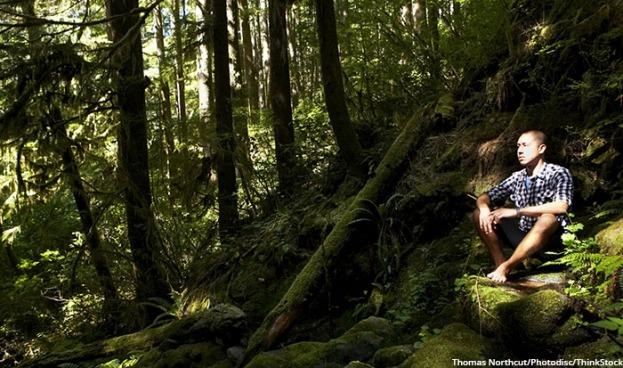 Reconnecting with Nature through Ritual

Posted by Frederic and Mary Ann Brussat on March 30, 2016

Many people feel that they are slipping further and further away from their once powerful and meaningful connection with the natural world. Stephen Cave and Sarah Darwin in their essay "It's Not Easy Being Green" on aeon.co describe a shamanistic journey they took in the Museum of Natural History in Berlin. They hoped that this ritual would be able to turn them around so that they could "live within the bounds of the Earth's resources." But they later admit that "changing individual behavior to be more ecologically responsible is remarkably difficult." Perhaps that is the reason why so many people around the world are stuck in a rut as far as their pro-environmental activities are concerned.

Researchers have uncovered 13 factors (from denial to a sense of powerlessness) that serve as obstacles to green behavior. Other reasons for our pulling away from nature are increased loyalty to cities, urbanization, and technology. But despite these impediments, the authors cling to the idea of participating in a ritual that changes perspectives and daily habits. Although the shamanic totem animal journey perks up their expectations, iit and John Seed and Joanna Macy's ritual called the Council of All Beings do not fully engage their senses or propel them to transform their feelings about doing the right thing.

We appreciated Cave and Darwin's observations on the value of specific rituals and the power of ritual behavior. They identify three broad categories of ritual for their intentions: (a) rituals that increasing connection to place and counter the increasing disengagement with nature, (2) rituals that address emotional obstacles to taking environmental action, and (3) rituals that help to eliminate harmful habits. The one that they find most practical and encouraging is observing a meat-free Monday. This communal weekly activity is modest but effective in its overall goal of helping them reconnect with nature.

We agree that we need more rituals to renew and revitalize the sacred links that wed spirituality, ethical activity, and nature. For an excellent resource on this union, take a look at our review of Dark Green Religion (2009) by Bron Taylor. He presents many rituals that have been used to foster positive environmental action.